It was a nice and clear day in Kathmandu. The sun was warm and the sky was blue. From early morning, Kathmandu residents began heading to Gauchar – for this day, their beloved king and leaders of Nepali Congress were to return home.

The people of Nepal revered their king, and were sympathetic towards him because he had to abandon his palace and leave for India. They were excited to watch him return home.

Exactly at 2 o clock, a roaring sound could be heard – the first plane arrived. In the plane were King Tribhuvan and his family members. They were quickly ushered to their palace.

Similarly, at 2:30 another plane landed. In this plane were leaders B P Koirala, Subarna Shumsher, and Matrika Prasad Koirala. Unlike, the royal convoy, the leaders weren’t allowed to head directly home – a huge rally had been arranged. 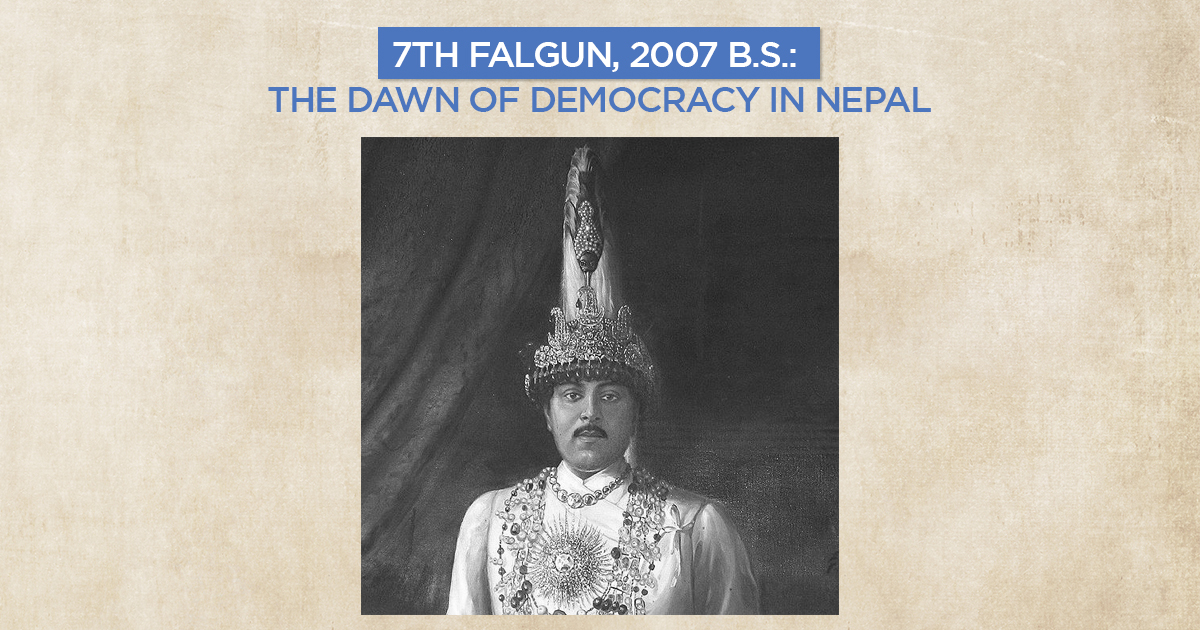 “To all nobles, religious leaders, subjects, merchants and others of the country,

Whereas the then enthroned King of this Kingdom in 1903 B.S., our late respected great great grandfather Sri Panch Maharajdhiraj Surendra Bir Bikram Shah, had owing to very grave and important reasons, invested his own and on successors behalf absolute authority to rule over this country.

And whereas now we have desired and have decided that our people who shall be in accordance with the construction framed by the constituent assembly elected by the people themselves.

And whereas, we have desired and have decided that until the constitution comes into effect, a cabinet constituent by the representation trusted by the people be formed and advises us in execution of our duties and responsibilities.

We urge heartily that all the above persons shall hold office at our pleasure and be collectively responsible to us.

And we urge also to all our subjects to be truly loyal to us and to all our successors and order all our officers in the Army and civil service officers in our country to help and cooperate obediently, with all our ministers in execution of their responsibilities.

If all those who were involved in political crime, return to their respective homes by 20/12/2007 B.S. and engage themselves in peaceful activities, they will be granted amnesty and forgiveness and all their properties seized on account of the political crime will be restored to them.

May god almighty grant us and our authority the strength to our above wishes for the benefit of the people.