After Koirala was released, Rastriya Congress tried to contact members of the Rana clan who were exiled in India, mainly Subarna Shamsher and Mahabir Shumsher. The exiled members were planning an armed revolution against the regime. Unlike Rastriya Congress, they had access to money, therefore were able to mobilise human and other resources quickly.

B P Koirala met with Subarna Shumsher and proposed he join the Rastriya Congress, however Subarna Shumsher rejected the proposal. Almost immediately after the meeting, in December, 1948, a new party called Nepal Prajatantra (Democratic) Congress was formed – under the initiative of Subarna Shumsher. The party said its objective was to uproot the Rana regime in Nepal and establish a democratic system in the country. 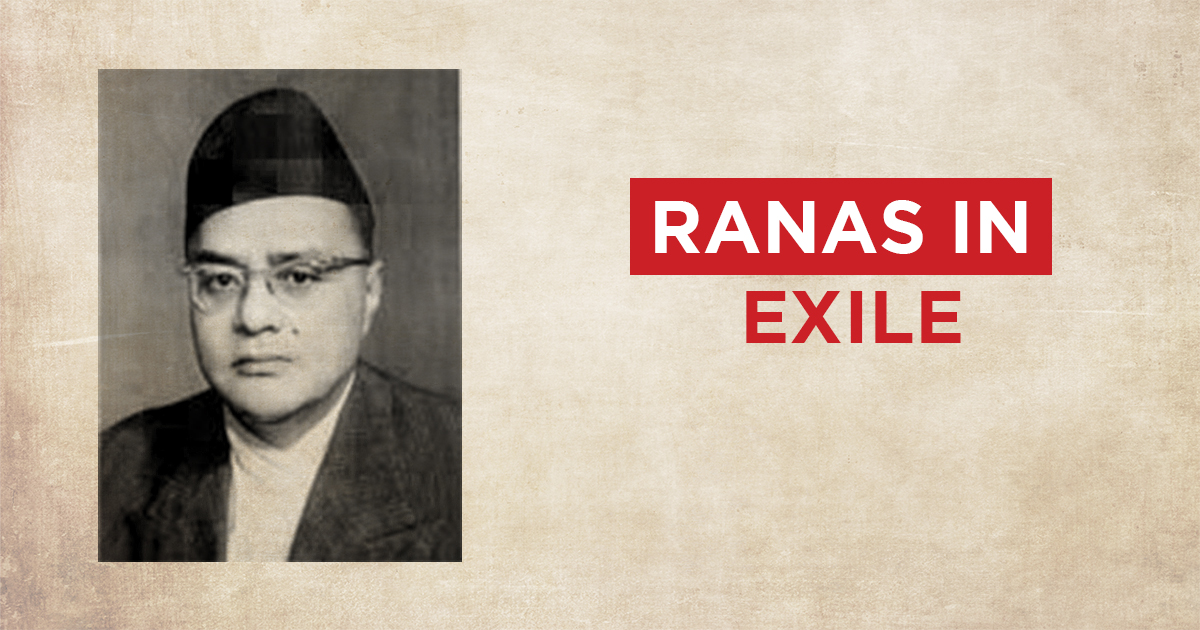 Immediately, the exiled Ranas mobilsed their wealth towards the cause; members were recruited and party-offices were established. “Many members of the Rastriya Congress too shifted to Prajatantra Congress”, Ganesh Man Singh would tell Mathbar Singh. “However, many stayed on with Rastriya Congress, despite the party’s lack of similar resources”, he would add.

Meanwhile, with the British out of India, Mohan Shamsher dedicated his efforts towards establishing diplomatic relations with the US, Australia, France and Italy. Mohan Shumsher also tried to admit Nepal into the United Nations; however, its membership was vetoed by Soviet Union.

An interesting point to visit here is the concept of First, Second, and Third World countries. Contrary to popular belief, the three aren’t related to the development status of a nation. The First World consisted of the U.S., Western Europe and their allies. The Second World was the so-called Communist Bloc: the Soviet Union, China, Cuba and friends. The remaining nations, which aligned with neither group, were assigned to the Third World. Both First World and Second World nations continually dedicate their efforts to sway the Third World nations.

Nepal which had already established diplomatic relations with the US would vote against the Soviet Union in the UN, therefore vetoed Nepal’s membership. 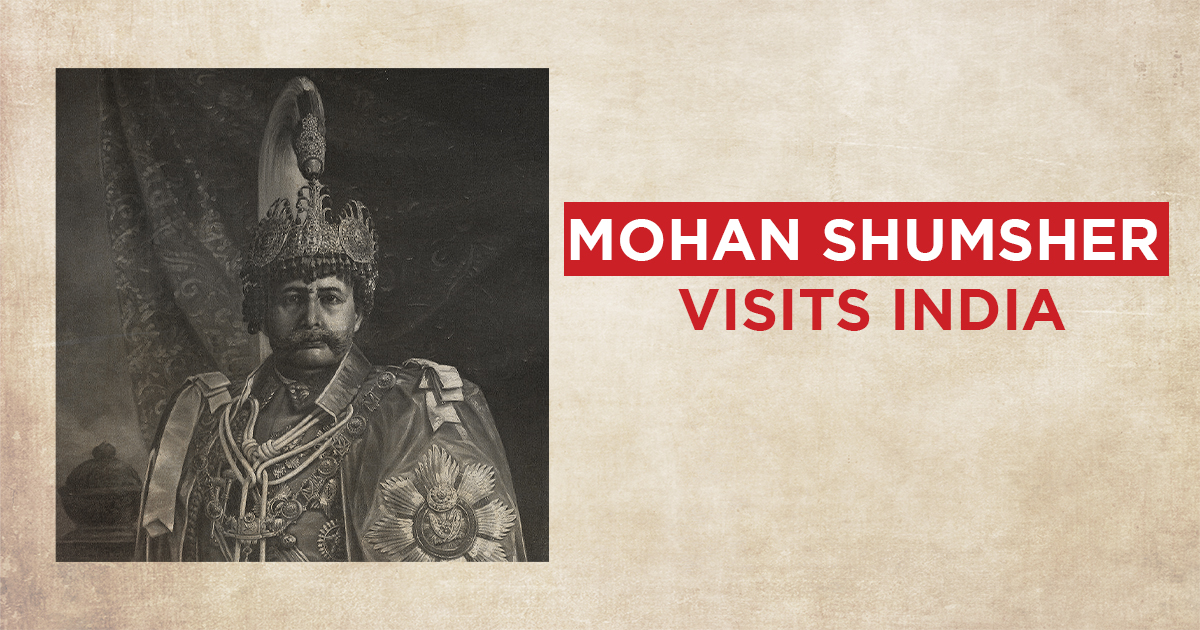 In the month of February, 1950 AD, Mohan Shumsher, with his huge entourage set on a goodwill visit to India. Owing to lack of an air route, the PM and his entourage had to set out to Bhimphedi via Chandragiri on foot, Bhimphedi to Amlekhgunj via a motor vehicle, Amlekhgunj to Raxaul via rail, and from then to New Delhi, India.

The news of Mohan Shumsher’s goodwill visit, ever since its announcement had dampened the spirits of Rastriya Congress – they suspected agreements between Nepal and India which would hamper Nepal’s fight for democracy.

For Subarna Shamsher led Prajatantra Congress, it was the other way round. The party was planning mass demonstrations against the PM, which further angered Ganesh Man Singh, as he believed Rastriya Congress too should be doing something similar.

Indian media were spreading speculations of various treaties between Nepal and India, however, none of it proved to be true. Matrika Prasad Koirala, on behalf of Rastriya Congress, issued a statement. Below is an excerpt:

“Proposed treaty between Nepal and India, if it does not promote the wellbeing of the people, will not be acceptable to us. The Maharaja, who is representing Nepal on this occasion, is an autocrat, who represents only himself. The total denial of democracy in Nepal when hundreds are either languishing in different jails, or else have been exiled from the country, makes the question of democracy in Nepal an issue of supreme importance”.

Mohan Shumsher and his entourage were accorded a warm welcome, and even honoured with a 21-gun salute. According to Singh, “his eight day sojourn proved to be very engaging, and of great diplomatic significance. However, nothing concrete was materialized”.

Rastriya Congress too was satisfied that no open agreement against democracy was signed, and following Mohan Shumsher’s return, Ganesh Man Singh too returned from Patna to Raxaul. Raxaul, which had adorned a grand look prior to Mohan Shumsher’s departure to India, was quiet after his return to Kathmandu. 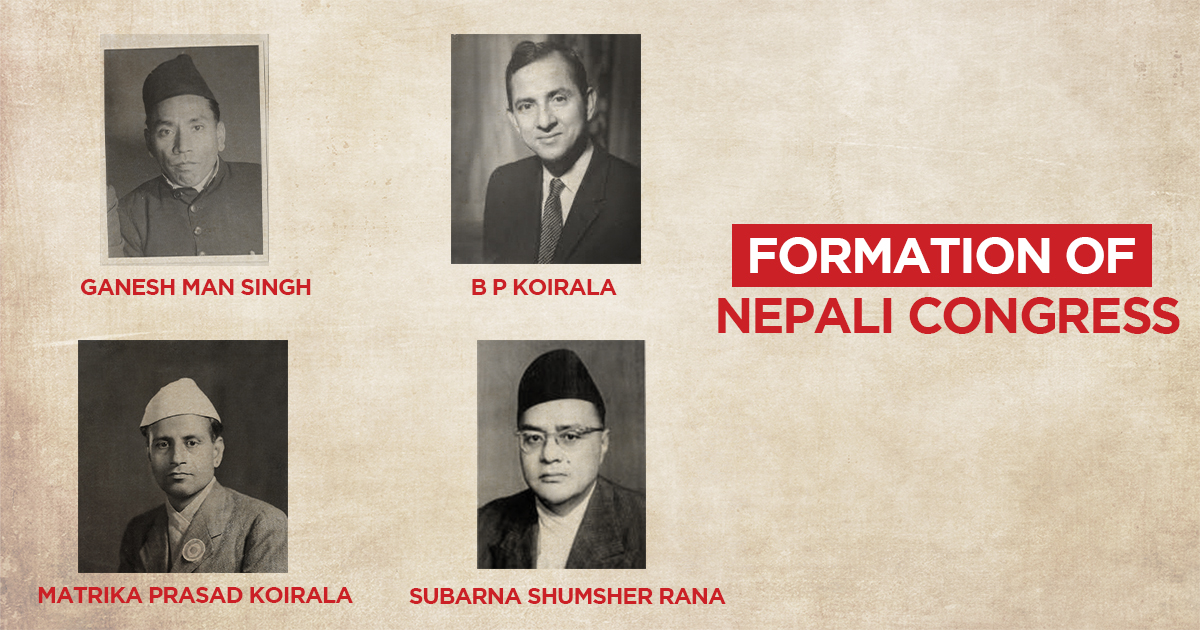 One day, Singh received a wire from B P Koirala which asked him to ‘come soon’. Singh, after managing funds for his trip, and making food arrangements for other party members, departed on a train.

“That night was particularly cold. As the train darted through the night, I found myself shivering. I did not have a blanket to cover myself, and all I could do was crouch and hold myself in embrace position”, Singh shares a vivid memory with Mathbar Singh.

The next day, he is informed by B P Koirala that Subarna Shumsher had proposed Rastriya Congress and Prajatantra Congress should merge into one party. Two days later, Mahendra Bikram and Surya Prasad Upadhyaya representing Prajatantra Congress arrived into Patna. Matrika Prasad Koirala too reached on the same day to pave way for a merger.

The talks were led by Upadhyaya, and it was learnt that Prajatantra Congress had no conditions or reservations.

“We were at liberty to take any action, but that very freedom also increased our responsibilities”, Singh remarked.

After Singh said the Party flag should remain same, it was agreed upon. Then came the task of naming the new party. Singh insisted the name Rastriya Congress should be retained, as the party had already stirred a few political movements, and the people of Nepal were familiar with the name.

Mahendra Bikram Shah objected. “Retaining the name of Rastriya Congress would indicate Nepal Prajatantra Party has merged with Rastriya Congress, and not that they were united into one party”.

Shah’s point was valid, and agreed upon. The discussion arrived upon two names – Nepal Congress, or Nepali Congress.