Final days before the establishment of democracy in Nepal

The week leading to the day of establishment of democracy in Nepal (7th Falgun, 2007 B.S) was spent in frenzy for Ganesh Man Singh. On 2nd Falgun, he was released from jail, and in a huge impromptu procession held in the streets of Kathmandu, the people of Kathmandu declared Ganesh Man Singh as their leader. It was late at night before he finally reached home. On the 3rd, the day was spent preparing for the welcome of King Tribhuvan and leaders of Nepali Congress. On the 4th, King Tribhuvan and leaders of Nepali Congress arrived – again there were huge processions and the people of Kathmandu heartily welcomed their king and their leaders.

Singh, who had been unable to participate in the Delhi tripartite talks was keen on learning about the exact details of the agreement – but hadn’t been able to catch up with his political colleagues in private.

“I was yet to be convinced by directly by the leaders under what context had the agreement been made? While I did not echo my frustrations with the agreement outside party circles, I was adamant that an explanation should be met by the leaders”, Singh told Mathbar Singh.

By the 5th, Ganesh Man Singh was highly impatient – early morning, he headed straight to Naxal to talk to either B P Koirala or Matrika Prasad Koirala. However, there were already people there. In addition, B P Koirala expressed some discomfort at his place of residence – at the family home of martyr Thir Bam Malla.

Koirala was used to a morning ritual – he would take an early morning shower with hot water and would make his own tea – something he wasn’t able to do so at his place of residence.

Singh was hearing Koirala’s discomfort when a friend informed them that Subarna Shumsher had invited Singh and Koirala for breakfast.

The duo, bidding goodbye to the friends assembled in Naxal, headed towards Baluwatar. 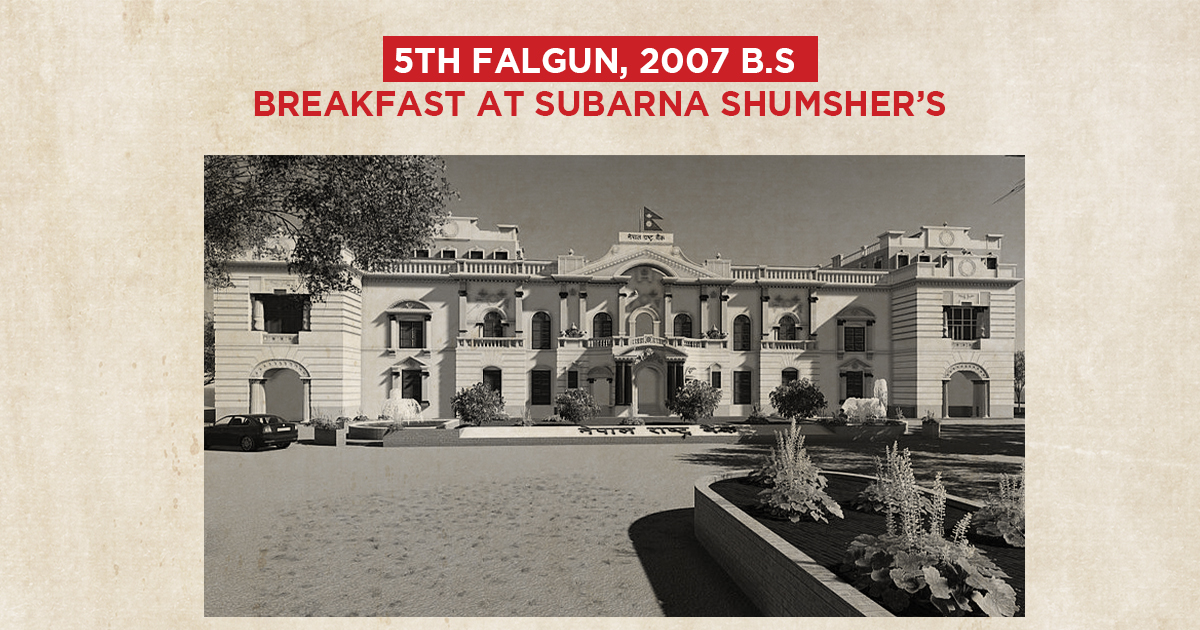 Once at Lalita Niwas, Subarna Shumsher after hearing B P Koirala’s plight arranged for him to stay at his house itself.  During breakfast, along with Man Singh, Subarna Shumsher, B P Koirala and Matrika Prasad Koirala, there were many other members of Nepali Congress present – courtesy calls continued throughout the morning. Singh was able to talk to B P Koirala and Matrika Prasad about the Delhi agreement, but weren’t able to discuss it in detail. The duo assured Singh that his concerns would be addressed.

Meanwhile, after leaders who had fronted the armed revolution at several areas of Nepal posed similar questions, Matrika Prasad Koirala announced a workers meeting the next day. The meeting would address all queries and grievances from party members.

“Friends from all parts of the country had arrived in Kathmandu to be a part of the transformation of power to the people. The real representatives were those who had taken charge of the fronts to ensure the people their democratic rights were ensured. Their concerns had to be heard and therefore the meeting was welcomed by all members”, Singh said.

Meanwhile, Singh and other leaders continued making courtesy calls. The same evening, Singh got the message that the swearing-in ceremony of the interim cabinet would be held on the auspicious hour of 03:30 p.m. on Falgun 7.

The swearing-in ceremony was also to be held in the Narayanhiti Palace instead of the traditional Hanumandhoka Palace. 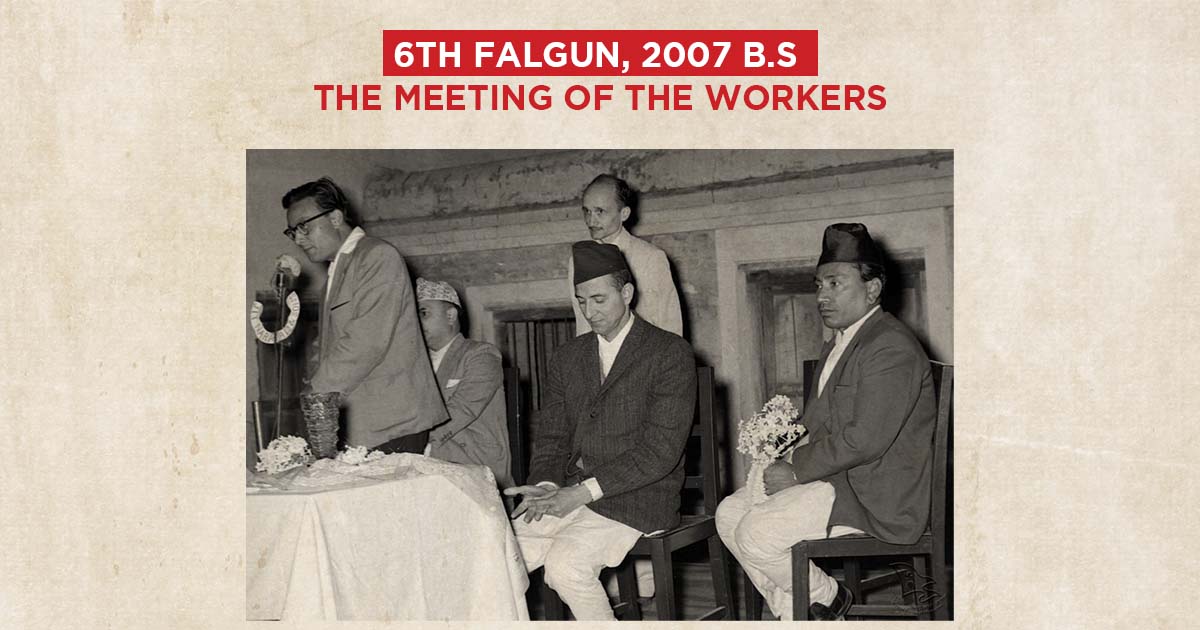 The next day, workers of Nepali Congress gathered in Naxal at the home of martyr Thir Bam Malla for a meeting.

“It was attended by representatives from Mechi to Mahakali irrespective of the terai, hills, or the mountain region. The spirit and enthusiasm was worth watching – in particular because earlier such a meeting couldn’t have been held legally”, Singh spoke of the meeting with great excitement.

“A thing (the meeting) which could not be imagined yesterday, had become a reality in the present”, Singh added.

The meeting was presided over by President Matrika Prasad Koirala, and was very cordial and friendly. Everyone was allowed to voice their questions/opinions, and answers were also provided. Most of the questions raised were about the ‘reason for cease fire when Nepali Congress was at the verge of victory?’ Some even said that they should not hand over their weapons as the Ranas were capable of betraying their trust.

Meanwhile, leaders answered all questions, explained the purpose of respecting the Delhi agreement towards a peaceful transition of power.

In the end, before Matrika Prasad Koirala was to give his speech, Ganesh Man Singh stood up and raised the issue of the letter rejecting a ministerial position which Singh had sent from jail. Singh said he would continue to reject the ministerial position, and would instead be more invested in party matters.

His remarks however were met with a huge outcry – everyone insisted Singh must become a minister. Finally Matrika Prasad Koirala had to intervene:

Singh accepted the position with humility.

It was on this day that Singh found out that Sundar Raj Chalise hadn’t posted the letter rejecting the ministerial position from jail.

Later, in the evening, all those who were to be sworn-in the next day, met up at Subarna Shumsher’s house.