The need for Nepal Women’s Association:

Also, ironically, the same leaders who would praise me for my participation in political affairs would not encourage the women in their homes to become politically active. However, to think that such sentiments were brewing only inside me would be lying – there were several other women who were conscious of their political rights, and were increasingly becoming aligned towards change.

Therefore, the need for a concerted voice was realized.

When someone would ask the need for a women’s organization, my answer was straightforward:

“That, women should be educated and informed. These educated informed women would then take their learning and understanding to improve society in general. Therefore, the need to empower women with knowledge was a prerequisite for change.”

Therefore an initiative to provide basic education to women began. Initially starting from the basement of Ananda Prasad Rajbhandari and Diwakar Rajbhandari’s home, the basic education program expanded to formal education establishments such as Padmajyoti School and Shanti Nikunja School.

One day, the newly educated students along with other women leaders organized a picnic at Mhepi Temple.  There, the decision to form a women’s organization was made.

Efforts to increase the member base of the organization began from the next day. Within one week, with everyone’s participation, enough members to form a formidable organization was realized.

One day, general members of the newly founded organization gathered at Chiniya Lal Singh’s home in Bheda Singh. Chiniya Lal is a martyr of Nepal, who was given a life sentence for resisting the Rana Regime. He passed away while serving his sentence in 1944 AD and his wife was one of the founding members of Nepal Mahila Sangh (Nepal Women’s Association).

The general meeting was one of the largest assemblies of women Nepal had ever seen. During the assembly, I was appointed president of the organization, Snehalata was appointed Secretary, Shree Maya Treasurer, and Rewanta Kumari Acharya, Hira Devi Tuladhar, Sita Devi Sharma, Gulbadan Tamrakar, Pratibha Karmacharya, Champa  Bajracharya, Tirtha Devi Shrestha and Moti Shrestha members. 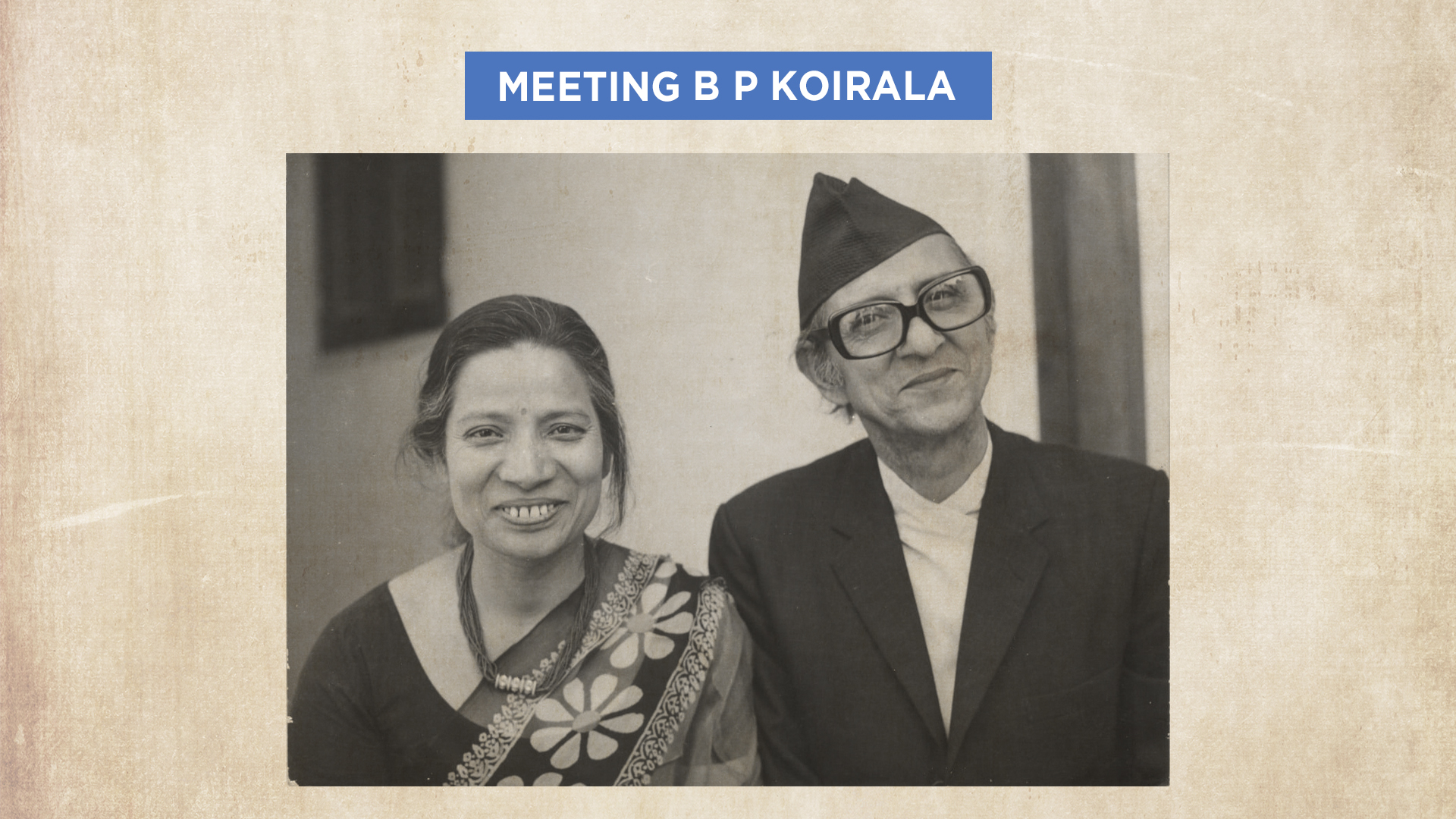 Upon the successful formation of the association, its policies and programs were formed which were mostly aimed at ensuring women’s political and education rights, and contribution towards the establishment of democracy in Nepal.

An office was established, however as the government was continuing its crackdown on pro-democracy activists, we had to ensure the office and its affairs would not be known to the public. For this purpose, a small clinic which was operated by a nurse was maintained as our office.

Neighbours and passersby would assume the hordes of women were there to learn basic nursing skills.

One day I received a letter, it was from B P Koirala, and he wanted to meet with us. I instantly reached the venue, and was greeted by Bishweshwar Prasad Koirala and Krishna Prasad Bhattarai, both leaders living in exile.

B P Koirala’s personality was impressionable. I remember telling myself that leaders should be like him.

Koirala and Kisunji were interested in knowing about the size of Nepal Women’s Association, and if its members would join the pro-democracy protests.

I assured them that our organization would lend him support.

This decision would be an important indicator towards Nepal Women’s Association’s recognition as a formidable political force.