The month of Magh was coming to an end, but the cold was yet to subside. Bhadragol Jail, according to Singh, was a terrible place to spend Kathmandu’s cold winter months. Owing the jail’s landscape, they wouldn’t be able to enjoy the warmth of the winter sun for very long.

They were looking forward to the warmer days of Falgun, when it started to rain continuously for a week.

“I do not know what havoc the rain caused in Kathmandu, but inside the Central Jail, the cold was unbearable. Several inmates did not have enough clothing or blankets to survive the cold. Out of pity, I gave my blanket to a group of inmates to use, but after that I was cold. Seeing my misery, my friends offered me their quilt, and even I was warm”, Singh shared to Mathbhar Singh.

This was the second time Singh was spending his days in Bhadragol Jail. He couldn’t help but remark upon the change in circumstances during his two terms – in his first term, food was scarce, but in his second term, food was in abundance. Singh had a strict policy that he would not trouble his family members when he was in jail, and continued doing so in his second term too.

But Shankar Man, Ganesh Man Singh’s own brother, who had been released from jail with other political inmates, would constantly bring warm clothes, food, and other things for Singh to enjoy in Bhadragol. Similarly, family members of other inmates would also bring ration, which the prisoners involved in the Indra Jatra plot would share.

“So much so, we would also enjoy tea inside Bhadragol Jail. We would sit down, with warm tea in our hands, and discuss politics and other national and international developments inside the jail”, Singh shared about his days in Bhadragol.

Singh was also happy about being moved from Singha Durbar to Bhadragol. At Bhadragol, the inmates had more freedom. They could cook their own meals, meet with other inmates, and discuss politics or other topics.

One of their constant topics would be the ongoing tripartite talks in Delhi.

Singh is released from Jail
(Freedom after 10 years) 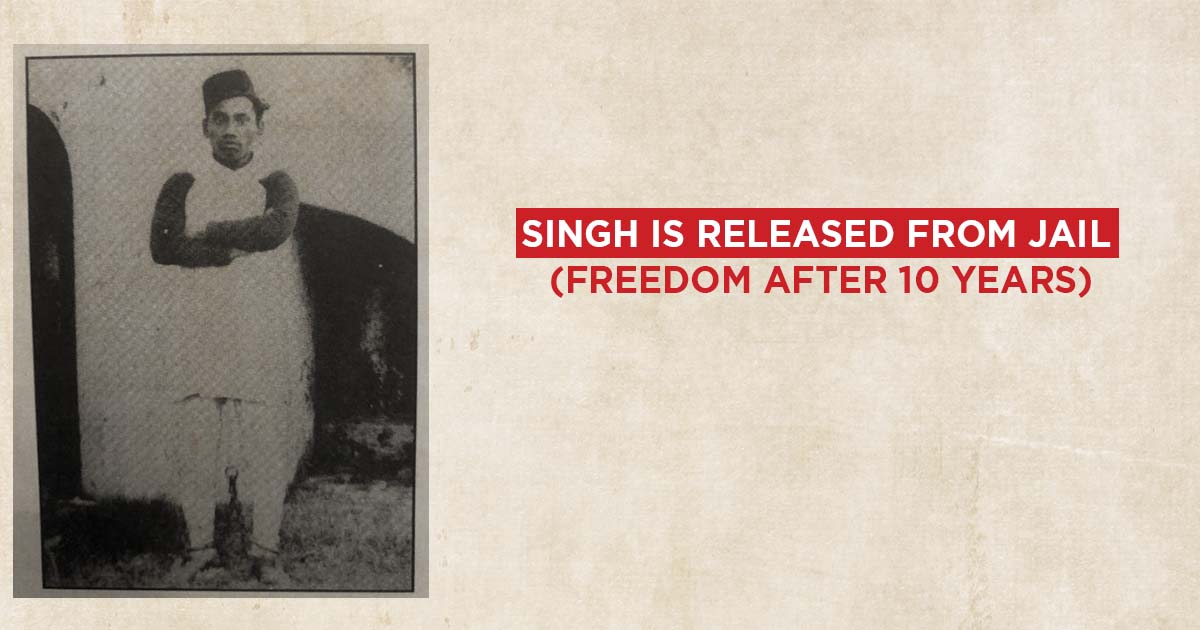 “I had just returned to my room after basking in the warm winter sun, and was readying myself to visit my friends for tea, when the supervisor informed me to visit the Captain (jailor) in his office”, Singh said.

The office was a short distance away, on the first floor near the main gate of the jail. According to Singh, at the mouth of the entrance, where the stairway began, an ironsmith was standing. He had a hammer and chisel in his hand.

Once Singh reached the pavilion, another officer standing guard instructed the ironsmith to clip Singh’s fetters. Singh was surprised, and asked the officer for the reason for his fetters to be cut.

“You are being released. The captain has your release orders”, the officer replied sharply.

A strange sensation overcame Singh. He felt slightly lightheaded as a million things crossed his mind. He lifted his leg to climb the stairs – his legs felt light. Singh was unsure if the reason behind the lightness was because the fetters which had been weighing his leg down were removed, or because he felt elated upon hearing the news.

Once inside the captain’s office, Singh was made to sign his release papers. As Singh signed the papers, the captain apologized to Singh for any inappropriate behavior, he, or any of his officers made during his stay in Bhadragol Jail.

The captain was still saying something when Singh interrupted, “You mean I can go home now?”

“Yes, you can”, the captain replied.

A crowd gathers at Tundikhel Kharibot:

And just like that, one fine day, Singh was free – after 10 long years. He had been arrested from his home in 1997 B.S. for his involvement with the Praja Parishad. He had spent four years of his term before escaping from Bhadragol, spent 6 years in hiding, and another seven months in captivity, before finally becoming a free man.

At the captain’s office, Singh asked if he could bid his friends’ goodbye, however he was prohibited from doing so. Protocol dictated that once Singh had signed his release papers, he could not be allowed back to his cell. His friends and his belongings would have to wait.

Singh remembers the day vividly. “The sky was clean and bright, and Kathmandu looked ethereal”, Singh said. “I stepped out of Bhadragol a free man.”

Singh began to trace his way back home, a million things still in his mind when some friends who had heard of Singh’s release caught up with him.

“Ganesh Man Ji, you have to wait here”, Tripurwor, one of the member of the group said.

“Why can’t I wait at home?” Singh asked.

“Your family is coming to greet you”, he replied.

Although a little hesitant, Singh decided to wait.

When Singh’s family members did not show, Tripurwor suggested moving to the Kharibot in Tundikhel.

Once they were there, a huge crowd started to gather in Tundikhel.

“At the time, Tundikhel was not segmented like today. It stretched uninterrupted from Rani Pokhari to Tripureshwor Chowk (where modern day Dashrath Rangasala is situated). I could see people coming in huge groups all the way from Bhotahiti, Mahankal, New Road and Sundhara”.

The time was 4 p.m., and thousands of Kathmandu residents had gathered at Tundikhel to see a recently freed Ganesh Man Singh.