Friendship with Dharma Bhakta Mathema and joining the Praja Parishad

One day, in between the weeks of searches, Ganesh Man Singh, while walking between Jhonchhe and Om Bahal, saw a muscular man massaging himself with oil – Singh flew into rage thinking ‘how could there be two lions in one forest’. Without an invitation, he entered the house, and challenged him to a display of physical fitness. Singh lost.

Still not giving up, on another occasion, Singh challenged him to a boxing match – the muscular man allowed Singh to deal a few blows of which Singh took advantage of. This infuriated the muscular man and he dealt a huge single blow – the next memory Singh has of is rose water being sprinkled upon him.

This muscular man was no other than Dharmabhakta Mathema – one time boxing champion of Bengal, and soon to be very good friends of Singh.

Once, while discussing the pamphlets being distributed by the Praja Parishad, Mathema warned Singh to read them in the privacy of his own home. Singh assumed Mathema was scared of the Ranas. 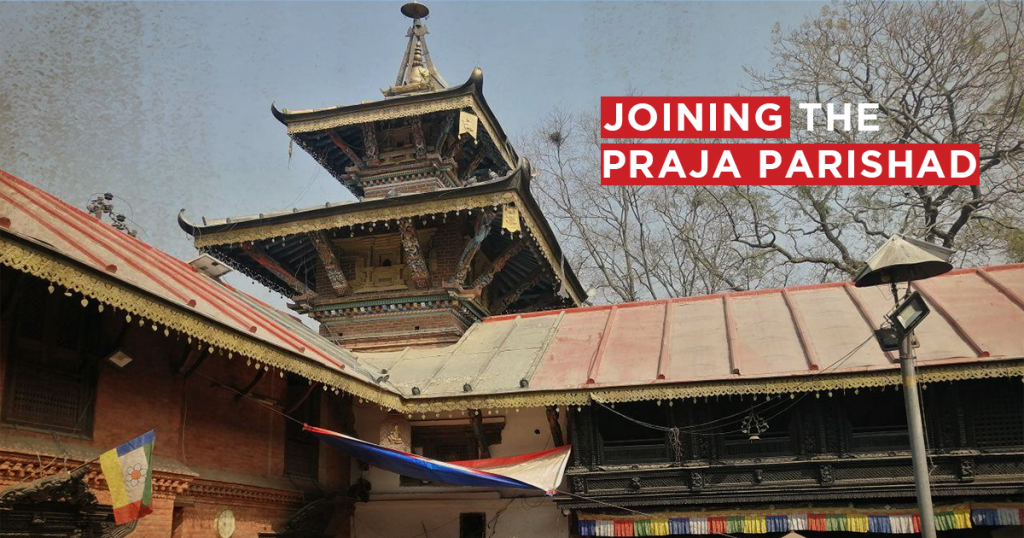 As the days passed, and Singh continued expressing dissatisfaction of their inability to find the Praja Parishad, on one particular day, Mathema asked Singh to bring Gangalal along with him. The meeting had to be arranged in private because Gangalal was on parole and under the observation of the Ranas.

After the three met, Dharma Bhakta Mathema revealed he was one of the founding members of the Prajaparishad – Singh did not believe him. As a proof, Mathema took out a pamphlet and told them that this was going to be the next pamphlet they would be seeing on the streets.

After being convinced, the three headed towards Mathema’s home to read the content of the next pamphlet. As the three rushed down Bijeshwori Road, Dharmabhakta stopped suddenly.

Mathema:  “It is the prescribed rule of Prajaparishad that one must take a sacred vow before joining the party. We have arrived at the Bijeshwori Temple – let us take our vows there”.

The trio entered the temple – Dharmabhakta stood in the centre, Gangalal to the right of the Mathema, and Singh to the left. Touching the feet of Goddess Bhagwati, all three took the solemn vow:

“From today, our efforts will be dedicated towards strengthening the Prajaparishad. Should we be caught while pursuing our goals, we will rather die rather than implicate the lives of others.”