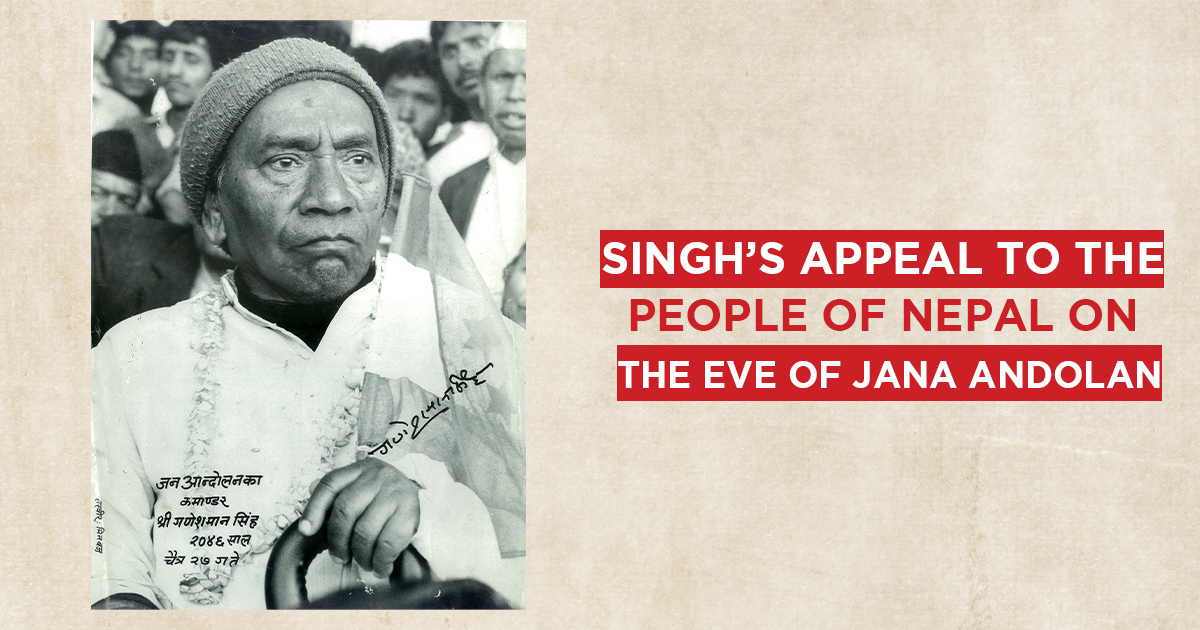 After Singh was released from custody, he drafted a letter reaching out to friends from all across the nation. In his address, he penned a powerful speech which would stir the emotions of all pro-democracy wishers. Here’s a translated copy of the text:

After many sacrifices, we were able to conclude the Revolution of 2007 B.S. with success. Today, it has been 29 years since the establishment of the Panchayat System in Nepal. Fostering a belief that the power to overturn this detrimental political system lies in the hands of the people of Nepal, endless efforts are continuing. Similarly, it is also important to remember the contributions of the countless martyrs who sacrificed their lives. The political system, which has been forced on us in the interest of national unity via public opinion, is in fact negligent of public opinion.  The public has been deprived of birth rights such as freedom of speech, freedom of expression. Even peaceful political gatherings have been banned which calls for an alternative. People are not allowed to protest against exploitation, injustice, corruption, inflation, and smuggling.

When I had met with His Majesty King Mahendra, I had said to gain national agreement there must first be an announcement of a general election which will elect a multi-party parliament. I believe that the nation belongs to every Nepali equally, and that every Nepali, through the power of their vote should be able to choose their government. This will solve our nation’s political problem. I had presented before the king my views about the best interest of the country, and its people, but what has been the outcome? It lies before your eyes.

We haven’t, and will not be able to forget the problems and earlier unseen inflation owing to the deterioration of Nepal-India relations (reference: 1989 Nepal Blockade by India). During such a situation, we are left with no other option but to come out on the streets. Therefore, a people’s revolution has become a situation of life or death.

This revolution is a revolution representing the people of Nepal – not for an individual political party. The mission of the revolution is clear: “provision of a multi-party national government”.

Bearing a clear vision and void of any retrograde element, I do not think any Nepali would be against this revolution. Initiated with a vision of restoring democracy in Nepal, if this revolution is not successful, Nepal, and Nepalis would lose all meaning.

Today, the globe is witnessing several waves of democratic reforms, and many dictatorship regimes are succumbing to these global waves (reference: dissolution of the Soviet Union). In Nepal too, the emotional excitement behind the protestors’ eyes cannot be masked. This kind of unfavourable situation is unseen in our national and international history. If we do not act today, we will not only affect our present, but will also push our future generations into darkness. I believe that you will express solidarity with the movement from wherever you are, and as per your capacity. Such kinds of national obligations are very seldom – it has come during yours and my time.

Owing to the national situation and my health, I am unable to come to your hometown to express my views, or to take your feedback, therefore share this letter with you. Nepal has placed a big expectation from you, and I trust you will not back out of your responsibility during such an important time.