Kathmandu Residents make Singh their leader, give him the title of ‘Bir Ganesh Man’

From Kharibot, Singh was watching thousands of people pour into Tundikhel – from Jamal to Tripureswhor. Over the distant horizon, the sun was beginning to set.

Seeing the crowd, Singh’s friends were encouraged to turn the numbers into a procession. A jeep was duly arranged. Singh, who was showered with garlands and vermillion powder also wished to get moving, and slowly the jeep made its way out of Kharibot. In the jeep were Toran Shumsher, and other friends of Ganesh Man Singh.

Singh tried to gather an estimate on the number of people that were there – but he couldn’t draw any conclusion. All he knew was the jeep struggled to get past the crowd of people who would cling on to the jeep to smear vermillion powder on Singh’s face. 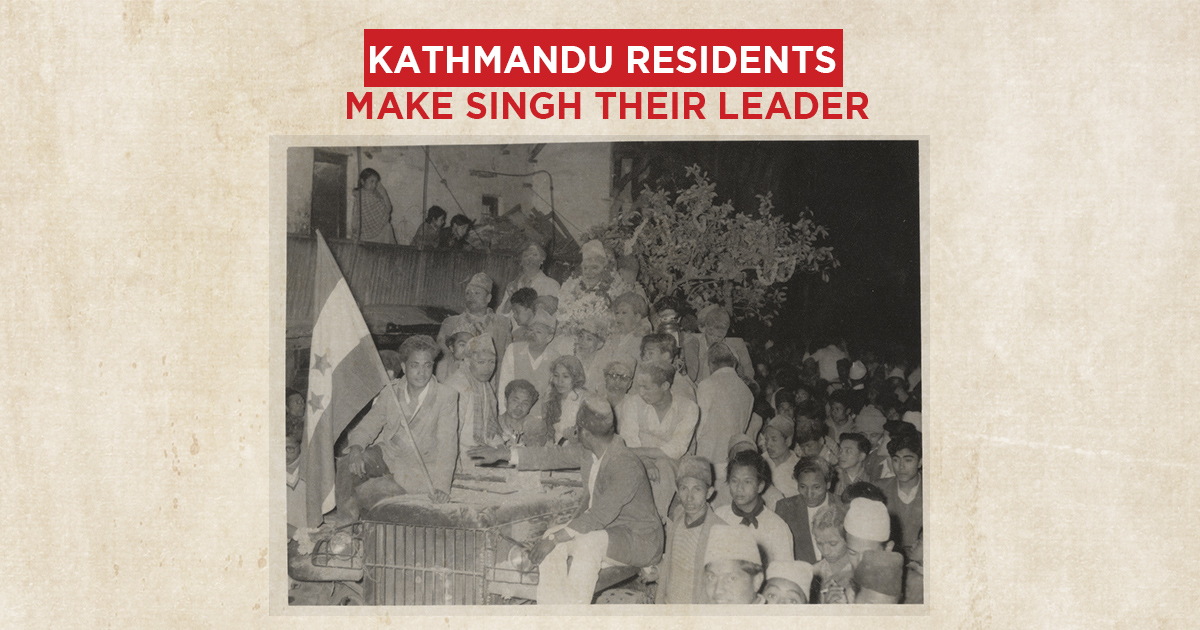 Singh was trying to make sense of the direction the jeep was heading towards, and after much difficulty figured they were headed towards Mahankalsthan.

“It was for the first time that people in Kathmandu had come out so fearlessly. Kathmandu residents were aware of the Delhi compromise and that the Ranas were in a disadvantageous position. Therefore, shunning all their fears for the Ranas, they poured out onto the streets”, Singh shared with Mathbar Singh.

From Mahankalsthan, the jeep headed towards New Road. Singh was overwhelmed to see the amount of people present there.

“People were on the sidewalk, on their windows, on their terrace, and their balconies”, Singh explained with excitement the size of the crowd.

“It was said at the time that the entire population of Kathmandu had joined the procession. Everyone was in the street irrespective of their gender, and those who weren’t in the streets, were watching from their windows, their terraces, and their verandahs. They would shower rice, flowers, and vermillion as our jeep passed their homes”, Singh added.

People give Singh the title of ‘Bir Ganesh Man – their Leader’: 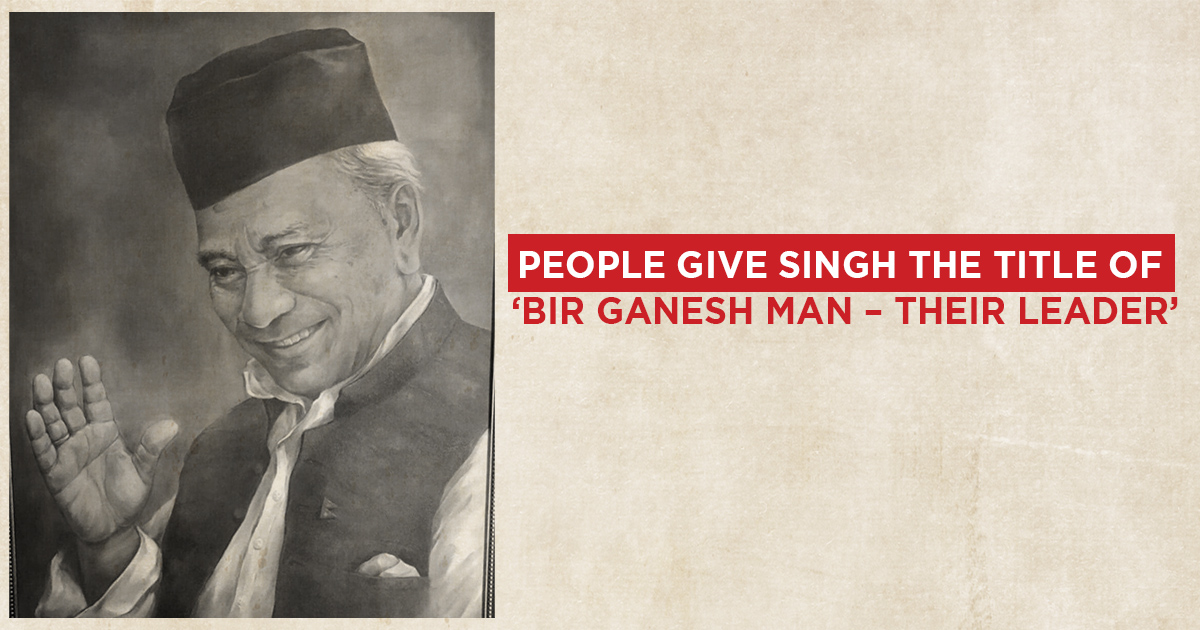 The crowd, while moving from Tundikhel were chanting several slogans, most of them which would celebrate a revolution. The tempos varied, and Singh believed the echoes of the chants probably reverberated throughout Kathmandu Valley.

However, once the procession neared New Road, a new slogan was added which caught Ganesh Man Singh’s ears.

Singh remembers experiencing a wave of different emotions – first he was elated to hear the title, it pleased his ear. Slowly, as the crowd started to repeat the chant, he became a little conscious – a shiver went down his spine after he realised the huge responsibility the people were entrusting him with.

“I had been in a state of trance since the procession had begun. However, after hearing the title being repeated across the streets of Kathmandu, I was jolted to reality. I reached out to my friends in the jeep, requesting them to stop the chant about ‘Bir Ganesh Man’, but they weren’t willing to listen”, Singh said.

“It is the wish of the people Ganesh Man Ji. We should not go against the wishes of the people”, his friends told Singh.

“Until then, I hadn’t thought of myself as a political leader. I may have indulged in the thought during my early political inclinations, but lately I was more occupied with the transition, and what would be best for Nepal. Was I ready to become a leader?” Numerous thoughts went through Singh’s mind.

In the background, the chants of ‘Bir Ganesh Man Singh’ could still be heard. 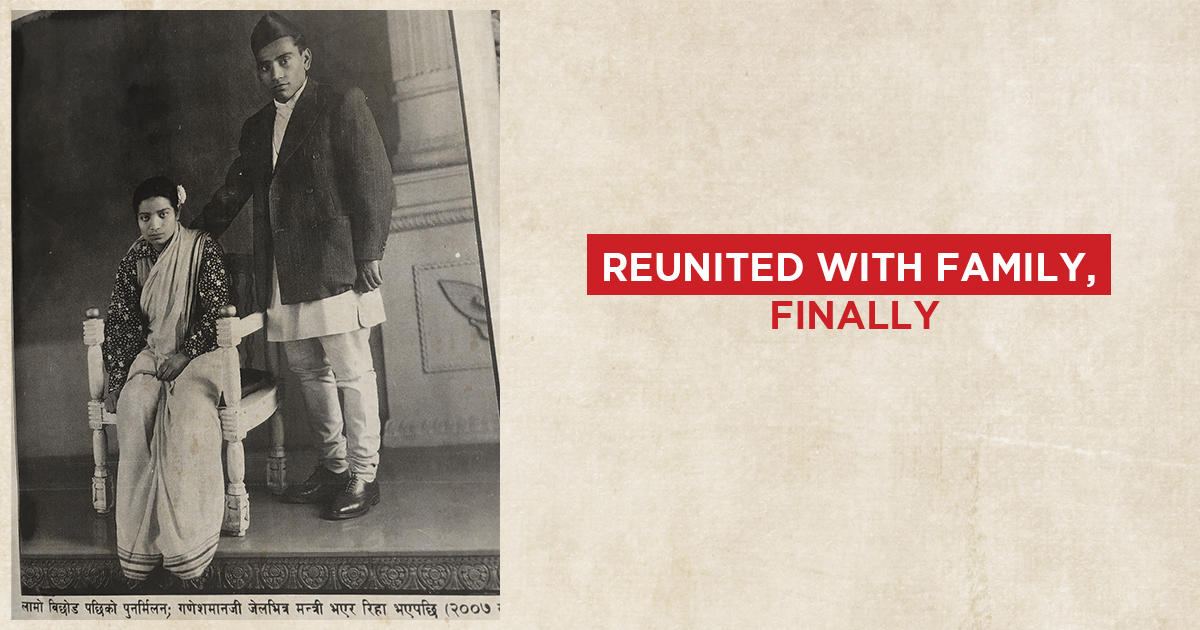 As the chants continued, Singh’s jeep reached Basantapur. The entire square was yet again filled with people, and the mood was festive. A band was playing music, people were rejoicing. Along with them, elderly women and other family members were waiting with ‘sagun’ – the traditional Newari ceremony which involves a ritual of presenting auspicious food to a person to invoke good fortune, and to show respect. It consists of eggs, fish, fried meat, ginger and liquor.

It is offered by putting all sacred material on the right hand and a pot of liquor on the left hand. The process of accepting a sagun is completed after biting the egg and taking three sips of liquor, and an additional three pots of helping.

The sagun offerings which started from Basantapur continued through the entirety of the route – Ganeshthan, Pyaphel, Naradevi, Tangal, Chhetrapati, Ason, Rani Pokhari, Durbar High School, and back to Tundikhel.

After reaching Tundikhel, the crowd’s enthusiasm still hadn’t subdued. So, they decided to take him home too. Thus, following the route of Bhotahiti and then to Indrachowk, Singh was finally taken to his home in Kilagal.

When Singh was arrested ten years ago, Singh was residing in his ancestral home in Yetkha. Singh’s family had moved to a new home in Kilagal in the meantime. Thus, the house he stared at from outside was entirely new.

But he knew, the people inside weren’t. He remembers feeling excited as he entered his home.

The time was 11:00 p.m. He was finally reunited with his family – after ten long years.