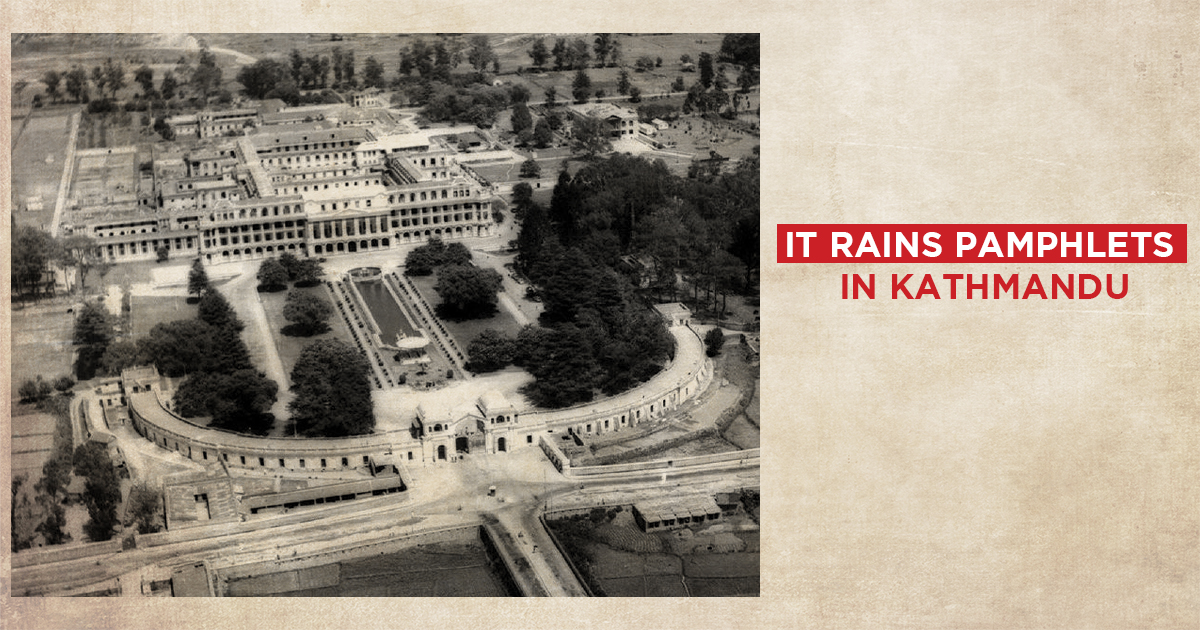 Nepal witnesses a surge in revolution

It rains pamphlets in Nepal:

A couple of days after King Tribhuvan’s departure to Delhi, Singh was sitting inside his cell impatiently waiting for more information. He was sure the revolution had started, and couldn’t wait to receive his daily updates from the guards that were friendly with him.

Suddenly, he noticed pieces of paper falling from the sky. The papers were scattered all over the compound of Singha Durbar. Singh could also hear the sound of an aero plane circling above the valley.

Singh and the guards were amused. One of the guards brought a piece of paper to Singh and asked him about the contents in the paper.

Singh realized it was a pamphlet which boasted the proud feat of Nepali Army in being able to successfully thwart the efforts of Nepali Congress in Birgunj.

Later, Singh was informed by another guard that Mohan Shumsher had ordered the distribution of the pamphlets to boost the morale of Nepali Army and the public. Singh also learnt that Nepali Congress too had distributed pamphlets all over Nepal – with the message that NC had launched an armed revolution against the Ranas. The pamphlets distributed by NC urged the public to support the cause.

Singh couldn’t help himself wonder how the Ranas had managed to hire an aero plane in such notice. For NC, it wasn’t a problem. Mahabir Shumsher, one of the founders and a prominent leader of the party owned Himalayan Aviation – a commercial airline which comprised mostly of Douglas DC-3 aircraft.

However, Nepal government did not own any planes, and it meant the Ranas had to hire a plane and get them to distribute the pamphlets.

Therefore two weeks after Tribhuvan’s departure, three dignitaries arrived in Nepal – two representing Britain, and one represented the United States. On the day of their arrival, a large number of people protested – refusing to accept Gyanendra as their king. 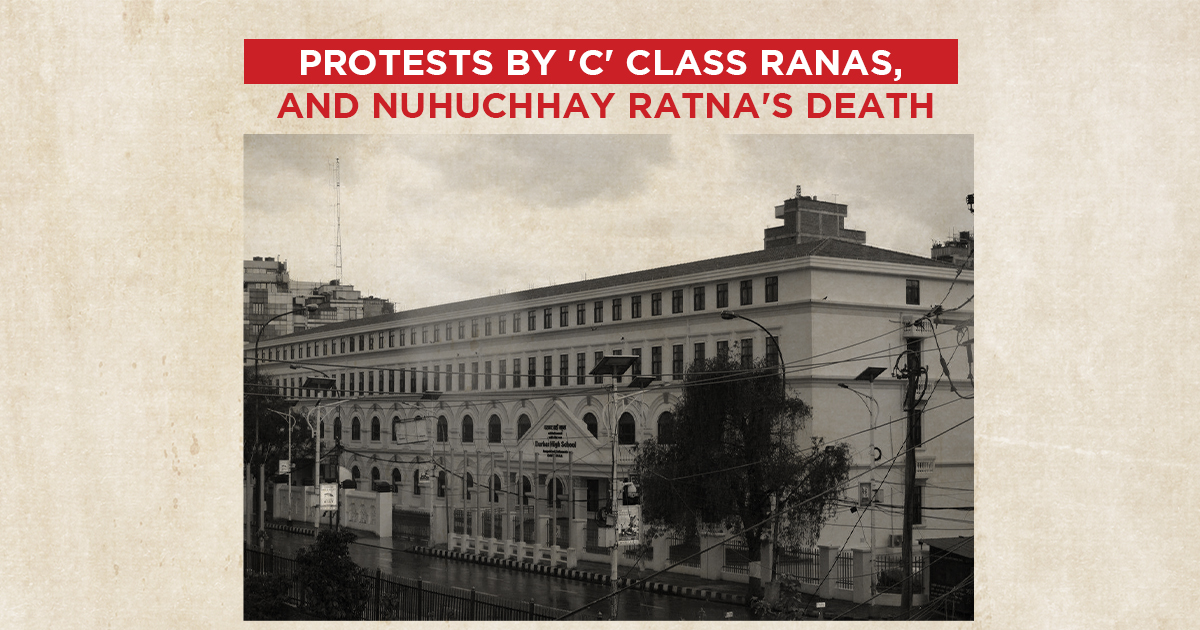 In Kathmandu, protests against the government were continuing – however, it was the death of Nuhuchhay Ratna Tuladhar which added fuel to the fire within the people of Kathmandu.

One day, a group of ‘C’ Class Ranas (those days, Ranas would be categorized according to the stature of the purity of their lineage, ‘C’ Class Ranas were those who were born of illegitimate wives of lower caste) were protesting against the government.

They had resigned en-masse from their jobs and were gathered outside Durbar High School.

A group of police officers had also gathered, and were driving the sightseers away using their sticks. Unfortunately, one police officer’s stick struck Nuhuchhay Ratna Tuladhar – just beside Bhotahity.

Till date, one isn’t sure if Nuhuchhay was just passing by or was watching the protests – however the blow was fatal. He coughed up blood, and instantly passed away.

Kathmandu citizens were unable to bear the mistreatment – Nuhuchhay was 63 years old and a chronic patient of tuberculosis.

“Nuhuchey Ratna was neither a politician nor a celebrity – yet his death emboldened the people of Kathmandu to come out in the streets. Thousands attended his funeral procession, and after the fire was lit on his pyre, staged widespread demonstrations. The public set fire on a police struck, chanted several slogans which also included praises of Nepali Congress. The people of Kathmandu had shed their fear and insecurity – all because of the death of a common man”, Singh said.

“That day the Ranas realized the tide had changed. Before that, the Ranas believed the people of Kathmandu were meek”, Singh added.

“Whenever I used to get information about the people’s movement, I used to feel excited. After all, which revolutionary would not be pleased after hearing the people had been emboldened? ” he said to Mathbar Singh remembering his days in Singha Durbar jail. 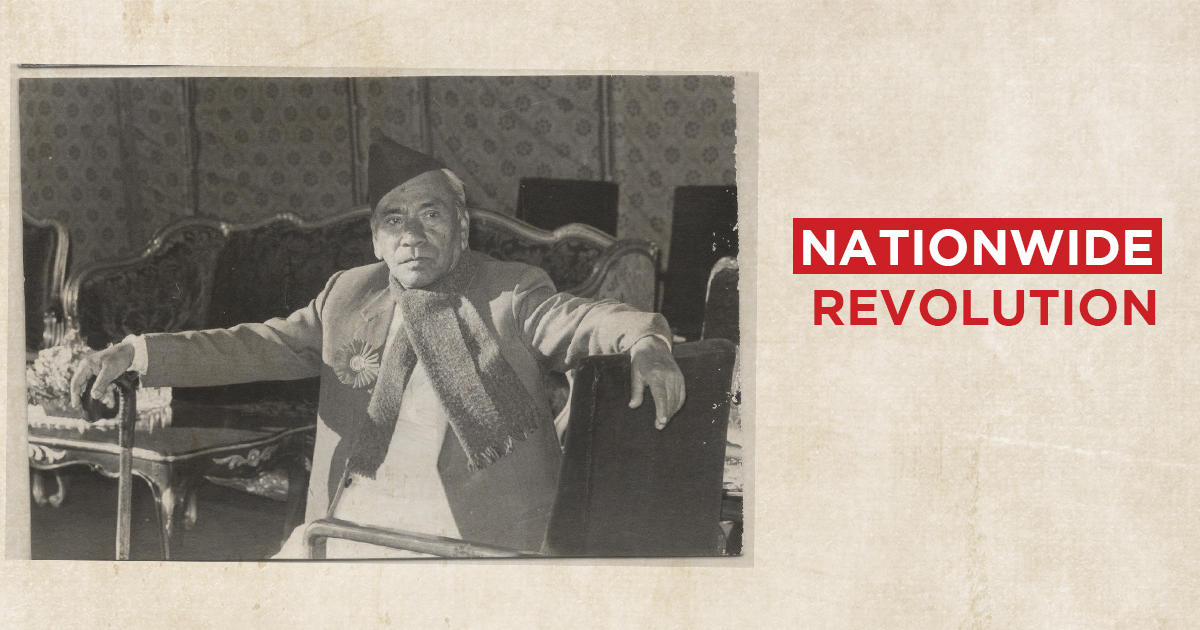 While Kathmandu was embroiled in protests, other regions of Nepal were also involved in similar demonstrations. Singh, who had a clear vision of the Singha Durbar compound used to watch the daily activities inside the premises increase. People and vehicles would enter the premises in the morning, and sometimes stay till late in the night.

Singh, who would spend his days soaking up the winter sun, would watch the events with great interest – awaiting guards to share information with him.

Singh learnt later that the Liberation Army had attacked Biratnagar immediately after the insurgency in Birgunj. Led by Bishweshwor Prasad Koirala, the Liberation Army waged a brave war in Biratnagar, and was able to capture several areas including the Revenue Office, the Bazaar Office, and the Forest Inspection Office. They were also able to take certain areas of Rangeli, however were met with a strong resistance by Rana forces under the leadership of Uttam Bikram Rana in several other areas.

In Palpa, the Liberation Army already had the support of Rudra Shumsher, and were advancing successfully towards the hill districts. In Baglung and Syangja, leaders such as Jawan Singh Gurung, Dhan Prasad Thakali, Pahalman Swar Singh, Chandra Man Sherchan, among others. Similarly, the Liberation Army also posted success in Kaski and Tanahun.

Just like that, the entire nation was engulfed in an armed revolution.