Nepalese youth head for ‘Lahur’; I learn about Singh’s escape

In the words of Mangala Devi Singh:

After Singh and other members of the Praja Parishad were convicted, they were transferred to Bhadragol Jail. Occasionally, I would have to hear a comment or two about Singh’s imprisonment. To which I would defiantly reply, “Yes, he is in jail. Not because he stole or murdered someone. He is in jail because he stood up for what he believed in”.

With time, the comments too stopped. Everyone got used to the fact that Singh would be in jail for a long time.

One day, my father visited my home, and inquired with me if Singh would be released any time soon. I, angry, responded rudely. My father returned quietly, not even drinking a glass of water offered to him.

In the evening, the incident reached Bada Kazi’s ears. Many were expecting that I would be reprimanded; however, Bada Kazi instead rebuked everyone for listening in to our private conversation.

In 1943, the ongoing World War had escalated rapidly – the main combatants being the Axis powers (Germany, Italy and Japan) and the Allies (France, Great Britain, the United States and the USSR). Because neighbouring India was under the British Raj and Nepal being an ally of the British Raj extended its support to the Allies. Thus, soliders (Gurkhas) were enlisted who would fight for the Allies (Great Britain).

A large number of Nepali soldiers would be seen in Tundikhel, shouting chants and slogans before making their way from Tundikhel to Raxaul to Lahore, and eventually to fight battles for the British Empire.

Then, there used to be a big cantonment of the British Army in Lahore (modern day Pakistan). Recruiting agents would go around the villages of Nepal and take the hill boys to Lahore, where they would be formally drafted. Hence the modern day term ‘lahur janu’ (to join the army).

At Tundikhel, I would watch tearful wives bid goodbyes to their husbands, clutching on to their young children in their arms. My heart would reach out to them, mostly to the wives and the children who were worried sick with uncertainty about their husbands’ return.

Once again, my hatred for the Ranas would rouse; “If it hadn’t been for the Rana regime’s alliance with the British Raj, these young boys and their families would be spared”, I would think.

It was during this war, Lal Bahadur Thapa and Gaje Ghale became recipients of the Victoria Cross – the highest and most prestigious award for gallantry in the face of the enemy within the British honours system.

Meanwhile inside Singha Durbar, perhaps due to the burden he had to carry of assassinating four noble citizens of Nepal, or simply because of old age, Juddha Shumser would not take pleasure in conducting state duties. Soon, he abdicated, paving way for Mohan Shumsher to become the new Prime Minister of Nepal. Initially retiring to Gulmi, Juddha Shumsher eventually retired in India, where he spent his final years.

I learn about Singh’s escape from jail: 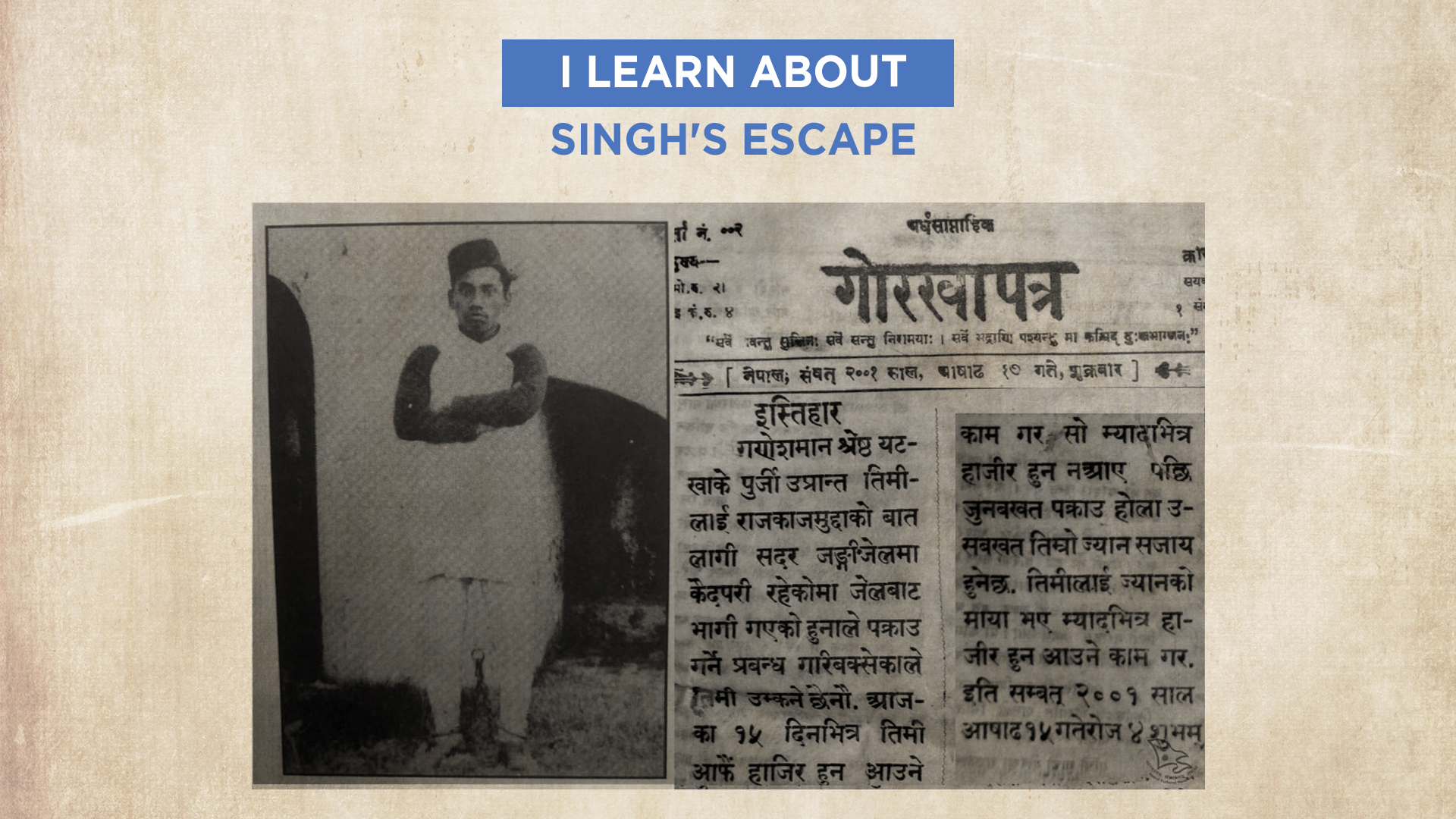 In Kathmandu, it had been years since I had seen my husband. Communication was limited to small letters and verbal messages which would be relayed by Ram Maya – a worker inside the Bhadragol jail. Ram Maya’s compassion towards the jailed members is unforgettable.

One day, news arrived – that Singh had escaped jail. The news spread like wildfire. To confirm the its authenticity, I reached Kunja Bahadur’s house. Kunja Bahadur’s brother Purna Bahadur M.A. too was serving a sentence in Bhadragol jail.  I was stunned to learn that Singh had arrived nowhere else but at Kunja Man’s house itself.

Kunja Man had arranged for Singh to be transferred to Bhimdhunga, from where he continued to flee the country.

On 30 June, 1944, a notice was published on Gorkhapatra (newspaper) by the government:

Ganesh Man Singh of Yetkha, who has been accused of treachery, and has escaped jail – you will not escape the orders of the state. If you do not surrender within 15 days of this notice, you will be sentenced to capital punishment upon being found. If you love your life, report to authorities within the stipulated time. Issued on B.S. 2001, Ashar 15 (28th June, 1944), 4 a.m.

I had no way to learn about his whereabouts, and constantly used to find myself worrying about him.