Nepal, at the cusp of a political change, was also dealing with different reactionary and anti-reactionary forces. Firstly, Nepali Congress had launched an armed insurgency across the nation, and was able to capture large swathes of Nepalese territory.

In Kathmandu, a new group had formed as a reaction against Nepali Congress. They were called ‘Khukuri Dal’, and as the name suggested constituted of members who would wield Khukuris and terrorise the people of Kathmandu.

“Shopkeepers and public would flee hurriedly after seeing them, and anyone who refused to run would be manhandled”, Singh told to Mathbar Singh, remembering the havoc caused by the Khukuri Dal. Singh, of course was still jailed inside Singha Durbar at the time, and would receive information from the guards.

According to Singh, Khukuri Dal was in fact the brainchild of Babar Shumsher, the brother of Shree Teen Maharaja Mohan Shumsher.

Babar Shumsher was next in line to be the Prime Minister of Nepal, and wasn’t willing to relent his position so easily.

“His (Babar Shumsher’s) palace, the Babar Mahal was the centre of the conspiracy, and all plans and strategies of the Khukuri Dal would be drafted there”, Singh told Mathbar Singh.

Ganesh Man Singh also believed that the Ranas, with the establishment of Khukuri Dal wanted to ‘showcase that everyone wasn’t happy with the activities of Nepali Congress and that there was support for the Ranas too’.

The Ranas went ahead and invited members of Nepali National Congress to Kathmandu too. NNC, headed by Dr. Dilliram Regmi too believed in a peaceful revolution.

Meanwhile, the birth of Khukuri Dal had given rise to another group of people – the Block Protection Group. The organisation would protect residents of Kathmandu against the terror unleashed by the Khukuri Dal, and keep an eye out for such activities by the Khukuri Dal.

Eventually, in the second week of Magh, thousands of Kathmandu residents protested against the Khukuri Dal. 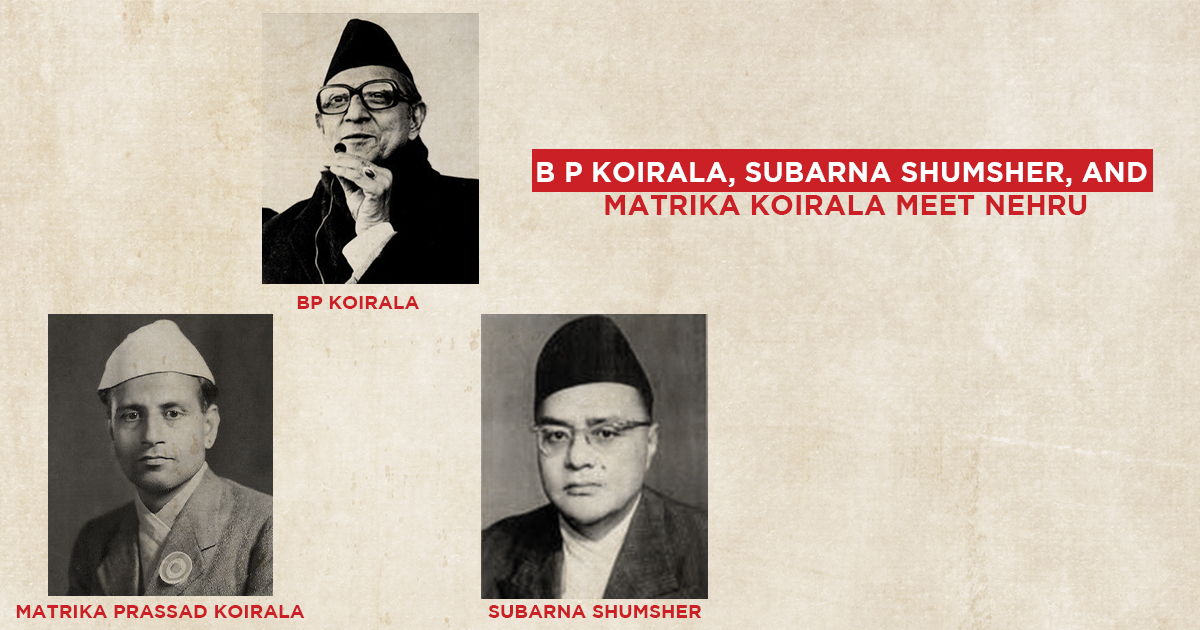 One day, Nara Shumsher, who had started becoming friendly with Ganesh Man Singh, came to his cell, and spoke to him about the revolution. He informed Singh about Uttam Bikram losing his son, and also told him that the insurgents weren’t able to capture Bhairawaha as of yet.

Singh was initially hesitant about being friendly with Nara Shumsher – after all he was the same person who had tortured him and his friends during the 1940 arrest of the members of the Praja Parishad. Nevertheless, over the course of time, and through frequent conversations, Singh’s perception of Nara Shumsher thawed.

At the time of Mohan Shumsher’s Proclamation, and King Tribhuvan’s approval of the proclamation, Matrika Prasad Koirala, President of Nepali Congress was in Nautanwa, Uttar Pradesh. Matrika Prasad was there to solve an inter-party dispute between the insurrectionists posted in Bhairawaha.

An ongoing rivalry between Dr. K I Singh and Gopal Shumsher, both posted in Bhairawaha had affected the war effort there. Gopal Shumsher had set his headquarters in Nautanwa, therefore his base was safe from the state forces and he could send his men to attack the Rana forces anytime. Meanwhile, K I Singh would take his men and fight in an impromptu manner without strategic planning. Thus, a communication problem between the two ensued, and due to lack of coordinated efforts, Bhairawaha could not be captured.

When Matrika Prasad Koirala returned to Gorakhpur, he found an invitation for consultation with the Indian government. B P Koirala and Subarna Shumsher too had received similar invitations.

The trio thus went to Delhi, and met with Nehru – who was playing the role of a mediator. 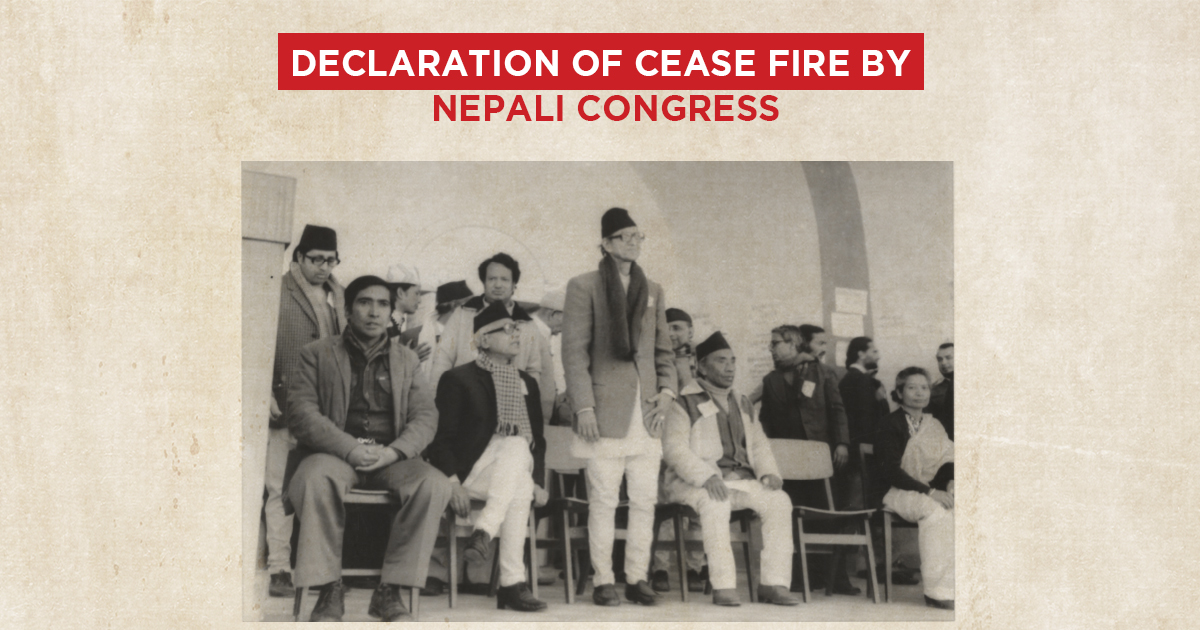 According to Singh, Indian PM Nehru was particularly impatient to get Nepali Congress on board with Mohan Shumsher’s Proclamation for reform. One reason also being the rapid advancement of the communist forces of China in Nepal’s north. He was of the belief that ‘further political instability would allow China to interfere in Nepal’s political affairs, and could be a fertile soil for the advancement of communist ideologies in Nepal”.

Therefore, on a cold day of 1st Magh, 1950 B.S, Matrika Prasad Koirala, on behalf of Nepali Congress urged all members to cease fire.

“After having consulted with the Indian Government about the Proclamation by Nepal’s Prime Minister Mohan Shumsher, and after considering King Tribhuvan’s statement, we have decided to halt our movement in order to foster a favourable situation for talks. Therefore, we are directing all our party workers to suspend their oppositional acitivities, and request all citizens of Nepal to work towards peace.

We are confident that the endeavour of the Nepali Congress to solve all issues and problems of Nepal will be peacefully completed. We appeal to all our members to peacefully join the process towards the betterment of Nepal”

(Excerpts from Matrika Prasad Koirala’s announcement via All India Radio).