Singh and team work towards accomplishing missions in Kathmandu

While Ganesh Man Singh had spent only six years in India, he had spent four years in jail before that, and three years in Calcutta prior to that – in total he had been away from Kathmandu for thirteen years. In the period of time, Singh’s friends and age-group people had settled down in life. They couldn’t be easily connected with, and whenever successful in reaching out to old connections, Singh realized they were busy with their day-to-day activities, and couldn’t be bothered with politics.

Therefore, it became difficult for Singh to establish a network of contacts.

Singh and Sundar Raj Chalise stayed together and began work towards reaching out to likeminded people. With both people wanted by authorities, they had to organise meetings discreetly.

Chalise, who was nicknamed ‘bagcha’ (dwarf), owing to his physical stature was easily able to blend, and therefore reduced the risk of being caught. Singh and Chalise were based at Raktakali, and delegated the task of networking to two people – Madhav Joshi of Kathmandu Ganesthan and Bholaman Singh Pradhan of Yetkha.

First the two would meet new recruits, and then by Sundar Raj Chalise, and finally by Ganesh Man Singh.

The exercise was necessary to prevent possible infiltration by Rana spies in the guise of political workers.

Pratap Bikram, during his meeting with Singh said Nepali Congress would need to declare a revolution in Nepal. He even suggested planting an explosive device near Gaddhi Baithak of Basantapur Durbar Square during Indra Jatra – at a time when Prime Minister Mohan Shumsher and other important Rana ministers would be attending the festivities.

Plans to launch an armed revolution: 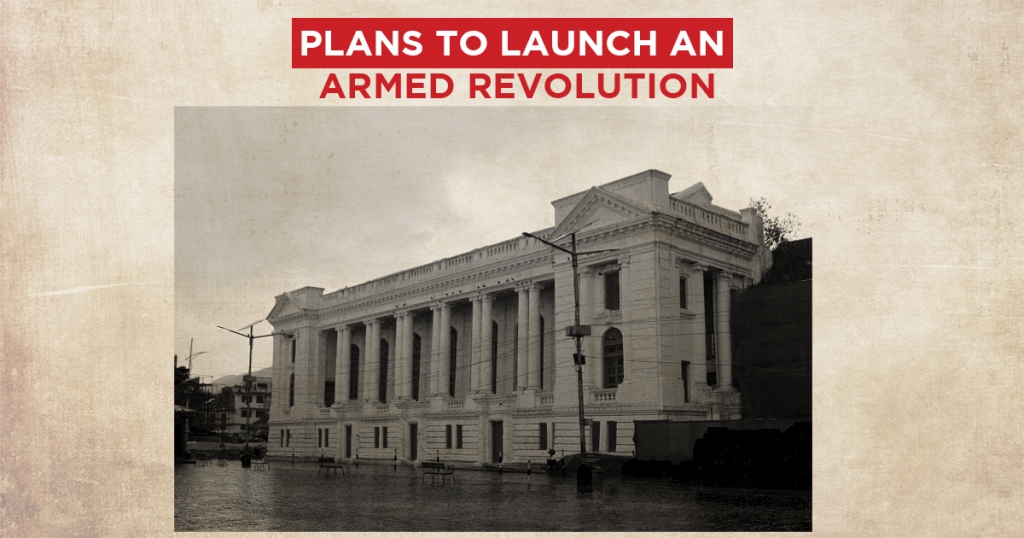 Ganesh Man Singh had two missions in Kathmandu – one was to take King Tribhuvan from his palace to Palpa, and the other was to launch an armed revolution against the Rana rulers. The armed revolution was to be in the form of an explosion at Basantapur Durbar Square on the day of the Kumari Rath Yatra (chariot procession of the Kumari, the Living Goddess), Indra Jatra.

Indra Jatra (Yain Yah) is an important festival in Kathmandu Valley – it marks the arrival of autumn in Kathmandu Valley, and features several religious parades and observations. It was during this festival, Prithvi Narayan Shah successfully captured Kathmandu in 1768 AD. In the coming years, Shah began a tradition of observing a victory day during Indra Jatra – a practice which was continued by the Rana Rulers. After paying their respect to the Kumari, the Sri Teen Maharaja along with other important figures in the roll of succession would attend the parade in the courtyard of the palace square – Singh and team were planning an explosion at that time.

To operationalise the plot, they were going to use the weapons and transmitter which they had brought with them from India. Dilman Singh Thapa lent his technical expertise, whereas Pratap Bikram Shah organized, managed and coordination all programs related to training.

However, on the designated day, they weren’t able to materialise the plan. Owing to the tight security around the area, the team responsible for planting the bomb failed to reach the spot of the Sri Teen Maharaja. Planting the bomb anywhere would mean putting innocent lives at risk; therefore Singh and team had to abandon the plan.

“That was how and why the plans to stage an explosion could not be implemented. The Ranas were thus spared of a political disaster”, Singh told Mathbar Singh.

After their unsuccessful attempt at killing the Rana Prime Minister, Singh and team started focusing on their other mission – their plans to take then King Tribhuvan to Palpa.

For that purpose, Singh and team needed to get in touch with the King and the Indian Embassy in Kathmandu – both were placed under surveillance by the Rana government. The king was placed in a virtual lockdown within his own palace and the king’s chief ADC (aide-de-camp) used to be the most trusted general of the Rana Prime Minister – who would duly inform all activities of the king to the Sri Teen Maharaja.

The Indian Embassy too was placed under surveillance to keep a watch on visitors going in and out of its premises.

Singh and Chalise figured a way to reach out the Embassy – through a sweet (confectionary) shop near Indra Chowk. The confectionary shop, known as ‘Maharajaji’s Mithai Pasal’ would make sweets and other delicacies to the Rana’s palaces, and also to the Indian Embassy. The owner’s son’s entry did not raise suspicion; therefore Singh sent a message of their arrival to the Indian Ambassador – to which they were responded with a message asking them to ‘be alert’.

They learnt that Sri Teen Mohan Shumsher had visited the Ambassador after receiving information of the arrival of Singh and team.

This was before Indra Jatra.

After the festival, Sundar Raj Chalise, upon the recommendation of Subarna Shumsher, had established a connection with the Royal Palace ditha (judicial officer) Dayaram Bhakta Mathema.

At the time, King Tribhuvan was confined to bed owing to rheumatic pains. When Mathema shared the plans, Tribhuvan said he wasn’t physically fit to travel by road to Palpa. “If Nepali Congress successfully negotiates with the Indian government to land a helicopter in the grounds of Narayanhiti Palace, then I would be willing to go”, King Tribhuvan said to Mathema. Mathema duly reported the same to Singh.