Following Gyanendra’s coronation, Singh was sure Kathmandu would revolt against the Rana rulers – he desperately awaited firsthand information. However, as all the guards deputed on Singh’s watch were new faces, they wouldn’t reveal much.

Every time the guard’s shifts would change, Singh would look eagerly outside – hoping a known guard would be posted. Two days passed in anticpation, however, no familiar face arrived.

On the third day, Singh awoke earlier than usual. It was a warm autumn morning.

Outside, in the garden, marigold flowers were blooming. Additionally, the garden had also been adorned with the traditional Tihar flower of Makhmali (Globe Amaranth). Singh stared at the beautiful sight, and was reminded the date held special significance in his life.

“On that day I had become 35 years old. The sight of marigolds and makhmali flowers reminded me of my birthday”, Singh told Mathbar Singh.

“Spontaneously many childhood memories, especially those spent with my family member’s during Tihar entered my mind”, Singh added.

“I had abandoned my family since I had entered politics. Even when I was free, and roaming around in India with no certainty about food and shelter, I had not remembered them as much. On that day, in handcuffs and fetters, I was remembering my family”, Singh said to Mathbar Singh feeling a little sad.

Singh also pondered over other things in life – how far he had come, how much he had achieved, and how much he still needed to do. He remembers being engulfed by a sense of inadequacy, when at that exact time, a commotion ensued.

Jolted from his introspective mood, Singh looked out of his cell. He realized the noise wasn’t made from human voices; rather it was the sound of the boots of army officers hurriedly gathering in the courtyard.

“Within no time, the ground was filled with soldiers, all uniformed and armed. Standing in attention, they awaited further instructions”, Singh said.

Singh continued to look outside. He wondered why the guards had gathered on a day when the city was observed in festivities. After about one and a half hour, the guard deputed to keep a watch on Singh came back to his post.

Catching an opportunity, Singh enquired with the guard the reason for the parade.

“Today, the traitor Tribhuvan is going to Delhi”, the guard replied.

Singh was ecstatic – one of his purposes of being in Kathmandu (to take the King away from Kathmandu), was being materialized. The other (to launch an armed revolution) was already underway.

“At the time, aero planes flying above Kathmandu wasn’t a common sight. Any time a plane would be heard, valley residents would stop what they were doing and stare with squinted eyes at the sky to catch a glimpse of the plane”, Singh said to Mathbar Singh.

Singh, unfortunately, confined inside a cell, could not stare up. Therefore, he had to rely on the sound of the aircraft to deduce where it would land.

“The present day airport in Gaucharan wasn’t developed into an airport yet. Planes would land either in Tundikhel, Lainchaur, or Gaucharan. I was curious to learn where it would land”, Singh said to Mathbar Singh.

He had no idea of knowing if the King and his family members were able to board the aircraft.

Singh spent the night in agony – he desperately wanted to know if the King was able to escape, or if his friends had already revolting.

He cursed himself for being in jail during such an important time. 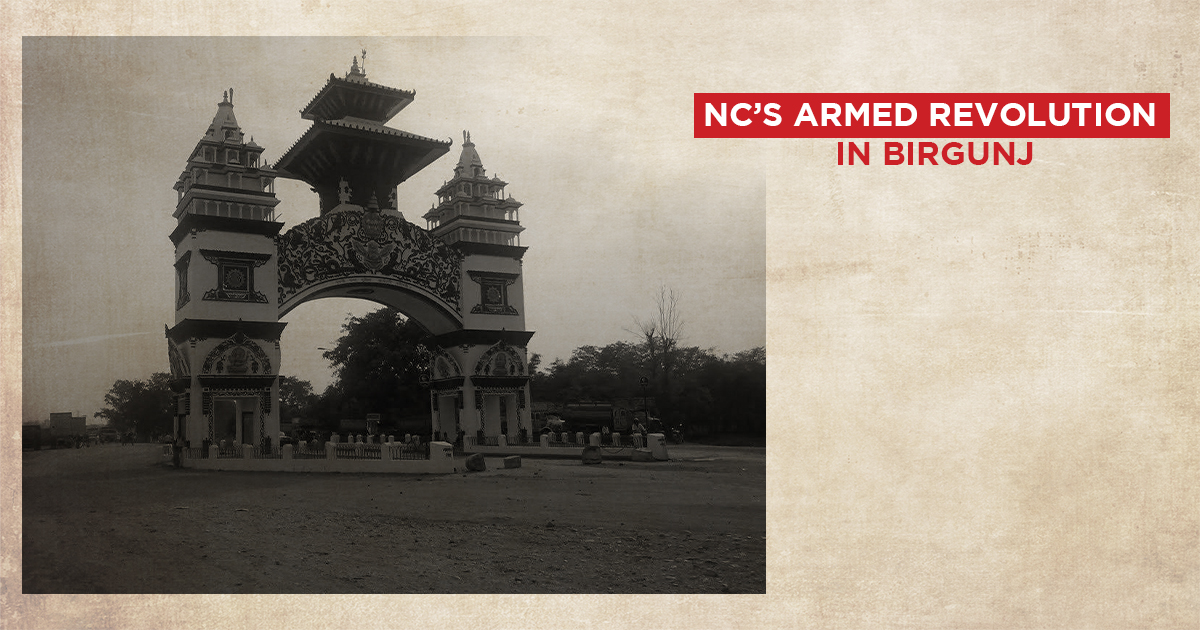 Singh’s prediction had come true – Nepal had been emboldened by King Tribhuvan’s departure.

The events following Tribhuvan’s departure, and the hours’ ahead attack in Birgunj by Nepali Congress would kick start ‘Sat Saal ko Kranti’ (the Revolution of 1950/51). The revolution would end with the immediate abolition of the institutionalized hereditary Prime Minister system in Nepal.

The next morning Singh is resting in his cell when he hears the morning guard arrive and narrate Birgunj’s account to the night guard.

“Yesterday, the dacoits from Congress attacked Birgunj, and were able to capture it. Hadn’t it been for the reinforcements sent from Kathmandu, the revolutionaries would have continued holding the city hostage” the guard said.

Singh listened intently, and at the same time wondered if the guard was speaking loudly because he wanted Singh to hear the story.

Meanwhile, Singh was enthralled to hear about the news of the start of the revolution. Singh believed Nepali Congress decided to begin their armed revolution from Birgunj owing to its special status. Birgunj, a town near the Indian border held strategic importance as it was well connected to Kathmandu.

Singh also learns the attack was launched at midnight of the previous day, before King Tribhuvan left the ‘soil of Nepal’. The government had to deal with an insurgency and the departure of the King on the same day.

Singh would only learn later that he also lost his good friend Thir Bam Malla in the Birgunj attack. Malla, friends with Singh from Calcutta, was the operation leader of the attack.

Meanwhile, the guard continued his narration.

As per the guard, at the time King Tribhuvan was to depart for India, thousands of valley residents had gathered near Baneshwor and Gaushala.