Singh was stunned after listening to B P Koirala’s wish to return to Nepal. A long period of silence ensued – both lost in their thoughts while a soft breeze stirred over Koirala’s terrace in Sarnath. Finally, Singh broke the silence:

“Koirala Ji, if you go around town sharing your views in the guise of a new thought – people are not only going to be shocked, they are going to worry about your health. That a political leader should take a ninety degree turn is unheard of, and completely unimaginable. I had never even thought that I would encounter such an experience – especially not from you. If you go around sharing such views, everyone will think you have become mentally ill. You know what they say – a healthy person’s imagination makes him/her a poet, an unhealthy person’s imagination makes him/her a mad person.”

Singh hadn’t imagined that B P Koirala would wish to return to Nepal. “Agreed, the situation wasn’t in our favour –prohibitions on political demonstration anywhere within 40 kilometres of Nepal’s sovereign land from India were weakening our revolution. Furthermore, India was pressurizing us to move down south to Bangalore – a proposition if which we agreed to would kill our revolutionary aspiration. We needed a country for shelter to plan our revolution – a land which was close to Nepal. Considering China’s political stance was away from democracy, they wouldn’t let us take shelter there. Furthermore, with Nepal-China relations strengthening under Tribhuvan’s rule – India was desperate to exert political pressure. Perhaps, they believed the proposition to move Nepal’s exiled leaders to the south would exert political pressure on the king”, Singh tells Mathbar Singh.

“I was surprised to learn that the pressure would affect Koirala Ji so quickly”, he adds.

Koirala waited for Singh to share his views. Singh, after a long pause continued, “Such decisions should not be made in haste Koirala Ji. This move could be suicidal for Nepal’s pursuit of democracy.”

“But to move to the south too would be slow-poison wouldn’t it?” Koirala was quick to answer. “Yes or no? Think about it carefully before answering?”

Singh didn’t have an option but to agree with Koirala. The matter of the fact was that moving to South India would indeed kill the movement.

“See, if death is inevitable, isn’t it better to ask for a quick death instead of a slow one?” Koirala asks.

Singh did not have a definite answer, therefore remained silent. However, his mind was racing – between different possible scenarios.

“Ganesh Man Ji, didn’t I tell you in the beginning itself – that this idea hasn’t crystallized yet? I am still thinking over it – a lot”, Koirala tried to assure Singh again. 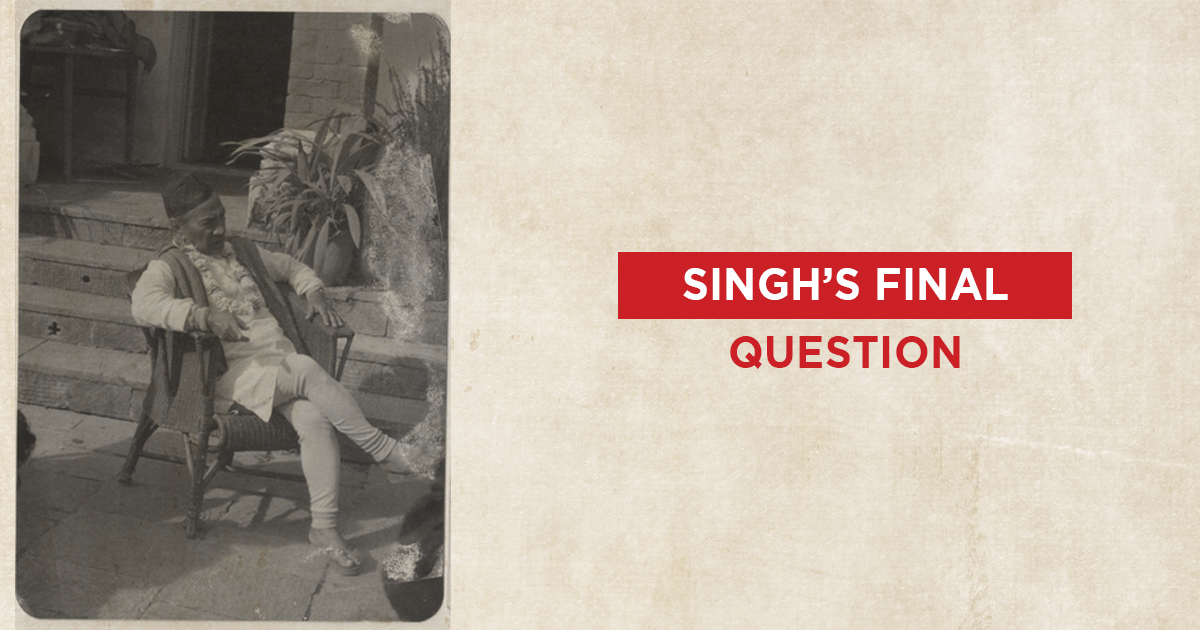 “What about our commitment to the revolution and our dream of reestablishing democracy in Nepal? A slow death, or a quick one, could give us relief – but will it give Nepal the same relief? Our country’s problem is going to remain the same. How will the people remember us? How will history remember us?”

Singh’s line of questioning got Koirala excited. “Yes, what you are asking is indeed the right question. We need to find a satisfactory answer for that, and that is why I am consulting with you before going public with the decision. We have to be answerable to the people of Nepal, and to Nepal’s history. But before that, we also need to answer our own selves. Once we are convinced of the decision, then only will we be able to convince our party members.”

“I repeat again Ganesh Man Ji –that my decision to return to Nepal is still in its early stages. I keep contemplating, and I consult with you because I need sound advice.  Please think over it and give me some good advice”, Koirala added.

“Koirala Ji, how will I be able to give you advice when you yourself don’t have a clear direction or even a concrete vision?  You are very unclear on your goal. However, if you ask me honestly, what I believe is that people will think that we have surrendered. Let’s both think over it more, and discuss it during our next meeting”, Singh said.

Both agreed – and although both had finished eating quite some time ago, they finally got up to wash their hands.

While walking downstairs to their respective rooms, Koirala once again reminded Singh that the idea to return to Nepal was in its early phase of development. He said to Singh that he needed more time to think over it, and yet again asked Singh for some sound advice.

“Sure Koirala Ji. Let us both think over it – after all the decision will not only impact us, but also the party, and our dream to see a democratic Nepal”, Singh said as they both climbed down the stairs.