Singh’s interrogation, and a merciless beating

Once chained and locked up, Singh, who had survived only on tea during his entire journey from Bhimphedi to Kathmandu, started feeling hungry.

He gave the guard on duty some money and requested him to bring some food. The food which the guard brought back, according to Singh was “one of the most delicious meals of potato curry and beaten rice he has ever eaten”.

The next day, Singh was summoned to give his statement.

Inside the interrogation room in the eastern wing of Singha Durbar, Mir Subba and Mahendra Bahadur Mahat were seated, and another man, who Singh could not recognize was seated in a nearby sofa.

Interestingly, Mahendra Bahadur Mahat was the same person who had taken Singh’s statement when he was arrested for his involvement with the Praja Parishad in 1940.

Mahat also knew Singh personally – as the grandson of Badakazi Ratna Man Singh, and asked him affectionately, “dear boy, what is your name?”

Singh wasn’t amused, and instead replied angrily, “what are you talking about? Aren’t you the same person who recorded my statement in 1940?”

Mahat was flustered, but kept his composure. He wrote Ganesh Man Singh on the form and continued his interrogation.

“Where do you live?” Mahat asked.

Singh, who was infuriated, reminded Mahat he knew the answer to that too.

Mahat insisted to know the answer, to which Singh replied, “If my address is important, then write my home is the Kingdom of Nepal”.

Meanwhile, the figure sitting in the sofa, who had been fidgeting all the while, started fuming at Singh’s arrogance.

Hurling all sorts of abuses towards Singh and his family, he ordered a beating for Singh.

Two guards produced their whips and started lashing at him instantly.

“The whips, which were wet, would curl around my legs, and leave me in an agonizing pain as they retracted. I clenched my fist, and tried my best not to fall. Whips after whips landed on me, and I felt as if my calf was torn in two.”

“The whips didn’t stop, and eventually a numbing sensation swept over me. I lost consciousness”, Singh recalls the memory of the day with Mathbar Singh – years after the incident. 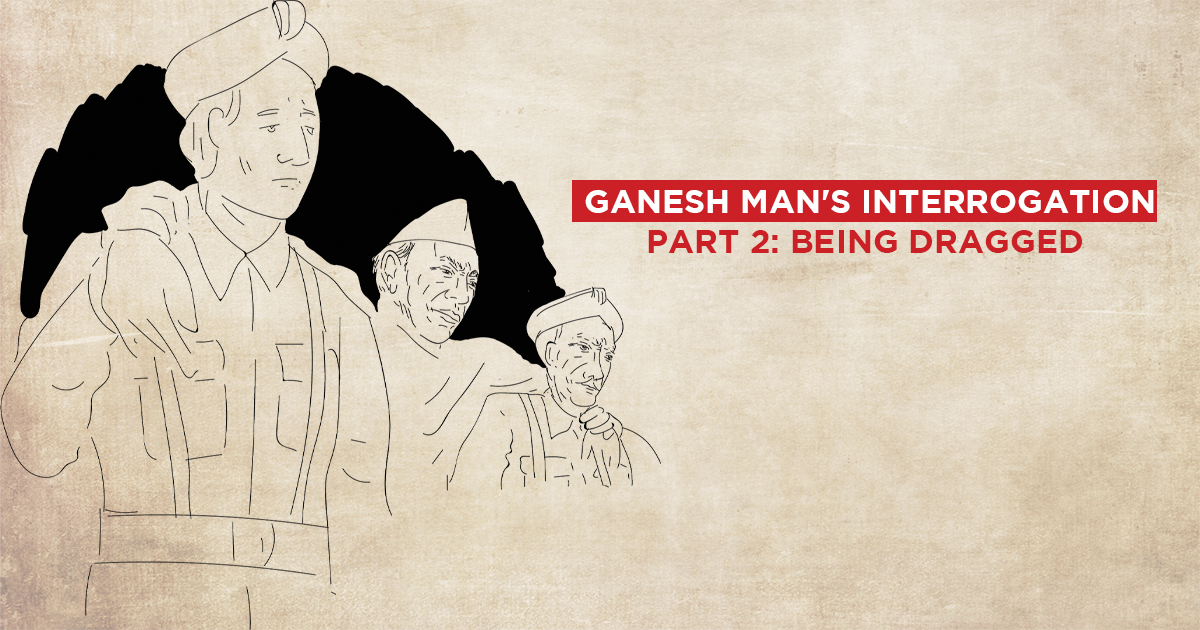 Meanwhile, the lashing continued – even when Singh was on the ground.

“All the times I would regain my consciousness, I would find whips lashing at me. It was neither too fast, neither too slow – and instead maintained a rhythmic pace”.

The man in the corner, who Singh later realized was General Hari Shumsher, was constantly screaming and yelling. The situation got so bad, Mahat, who feared for Singh’s life, pleaded the General to stop.

Singh, who was in a semi-conscious state, was writhing in pain – he couldn’t even locate where it hurt him exactly. His mouth was so dry he couldn’t even swallow his own spit. Mustering all of his energy, he asked for water.

The general, who had finally calmed down, went into another fit of rage. Looking at the guards, he asked if anyone felt the need to urinate.

“Urinate into this fellow’s mouth. He says he is feeling thirsty”, he screamed at the guards.

After a few moments, General Hari Shumsher ordered Singh be taken away. “Drag him like a dead dog”, he ordered the guards.

Two guards hurriedly picked him up and began dragging him out of the room. Once out of the sight of the general’s view, the guards offered their shoulder as support, picked him up, and took him to his cell.

“The guards, who had to be obedient to the Ranas, were human beings after all. They felt sorry for me, that’s why lifted me the moment they were out of the general’s sight”, Singh shares his views with Mathbar Singh.

Once back at the cell, the guards gave Singh some water to drink, and let him down to rest. It was already evening, and Singh tried to sleep the pain off – however that wasn’t possible.

Singh spent the night in agonizing pain – his hatred towards the Rana government becoming sterner with every wince he let out.

The next day too, Singh was reluctant to drink or eat, worried how he could drag himself to the toilet. But in the evening, the guard who was attending Singh requested him to eat.

“But I cannot walk all the way to the dining area and back. And how I will go to the toilet in such a condition”, Singh asked the guards?

Singh agreed, and enjoyed a delicious meal of rice and black pulse soup, and mustard greens.

Late in the evening, the guard attending Singh, out of curiosity, asked him, “you, Ganesh, tell me truthfully, who among your parents is Newar?”

“Both of them are Newars”, Singh replied laughingly.

But the guard wasn’t convinced – “don’t talk nonsense. Either your mother or a father is a ‘Chhetri’ caste.”

Singh wasn’t angered by the remark – he understood where the guard’s opinion came from.

“No, my parents are both Newars”, Singh assured the guard.

“Such a brave man born of a Newar woman!” the guard exclaimed.

“You have done your mother justice. You have gained the admiration of all the soldiers here. I was counting the number of lashes you received. It was 603 until you collapsed. After that I stopped counting.” he added.

Singh, who was listening to the guard, was suddenly jolted with the memory of Gangalal – he too had witnessed a similar thrashing. Remembering Gangalal’s ordeal, Singh’s eyes moistened.

The guard, who was continuing his narration stopped abruptly after seeing Singh’s eyes moisten.

“Common, you did not cry yesterday. How can you cry today?” he asked Singh.

“No brother, I do not cry for myself. Listening to your account, I was reminded of a friend who was beaten up like me, and therefore the tears”, Singh replied to the guard.