Continuing to think about the countless contributions of the public towards a revolution, Singh and his team trudge along the jungles of Terai. “We would sometimes be drenched due to the rain and at other times due to sweat”, Singh remarks, remembering the journey he had made many decades ago.

The next day, around noon, they arrive upon the banks of Lakhanti Khola. Lakhanti Khola, at the foothills of the Mahabharat Range was twice the size of the Marin River – and unfortunately, there were no ferries or elephants to help them cross this river.

For two days, Singh and team wait for the floods to subside. “The water, muddy red in color would sometimes bring logs, or other debris – a gentle reminder of the havoc it must have created in the hills.”

“On the third day, the water subsided to a crossable level. We were tired of waiting in the middle of the jungle. The hills across the river lured us with its promise of cooler weather. We therefore decided to cross”, Singh recounts.

“We held each other tightly, made a single line, and began fording the river. An hour later, we were all able to cross the river safely”.

Rejoicing, the team trudged along the foothills – leaving the dense jungle, flooded rivers, and the steaming heat of the Terai behind them.

They took shelter at a farmer’s house in the evening. Singh remembers being very deeply moved by the plight of the farmer and his family.

“His pitiable condition reinforced my resolution to uproot the Rana regime in Nepal, and pave way for a government system that adopts economic policies that would uplift all people of Nepal”, Singh told Mathbar Singh later.

The farmer, despite the poverty, offered Singh and his team fried wheat and fried soybeans.

In the evening, they slept in the verandah.

“The cool breeze of the hills put instantly put our tired bodies to sleep”, Singh reminisces the night.

A Hearty meal at Mahadevtar: 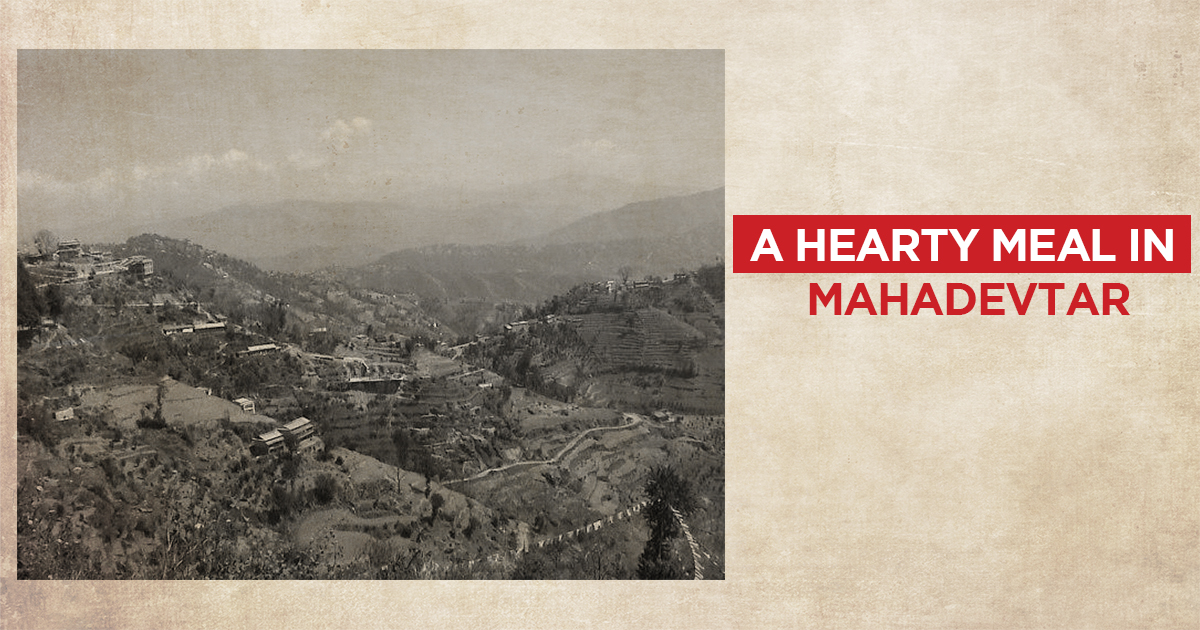 The next day, at the crack of dawn, Singh and his team rose, and continued their journey along. Around noon, they reached Pangu Mahadevtar. In the distance, they could see the hill of Palanchowk Bhagawati.

Sundar Raj Chalise had a friend who owned a shop in Mahadevtar, Dharmalal of Bhaktapur. The team decided to rest there. They were also supposed to eat lunch, and everyone hurried because on that day, they were going to enjoy a hearty meal of rice and lentils (dal-bhat) – something they had been deprived of since they entered Nepal through Sarlahi.

“We were in fact so hungry, just the thought of the meal would make our mouths water”, Singh would remark later.

Once at Dharmalal’s shop, the team bought some rice and lentils. Decidie to rest while the meal was being prepared, Chalise asked for a safe place. Dharmalal took them to his terrace.

Once in the terrace, Singh and his team saw the shopkeeper had kept a few local chickens (Rato Bhaley). The entire team instantly craved meat, purchased two chickens, and sent it to the cook to be readied along with the rice.

“It was like Dashain for us”, Singh remembers fondly enjoying the very well prepared meal of rice, lentils, vegetables and chicken.

Following the meal, Singh and his team experienced a dull feeling – the same kind we feel after enjoying a heavy lunch. The dullness, coupled by their fatigue put them into a sweet slumber – on the rooftop of a house in a hill in Kavre Palanchowk.

Singh and team woke up late in the evening. Having erased their hunger and fatigue – they carried on towards Banepa.

Back in the day, the route from Mahadevtar to Dapcha, and then to Banepa used to be frequented by travelers. As they neared Kathmandu, they had to adopt more caution.  Therefore, Singh and team ensured it was nightfall before proceeding.

After reaching Dapcha, they proceeded towards Panauti. Stopping for dinner at Khopasi of Panauti, they proceeded directly to Banepa. Once in Banepa, they reached out to Rajdas Baday Shrestha, an active member of the party.

Rajdas was a well known businessman in Banepa, and also an active social worker. Various people would visit his house, which would increase the risk of Ganesh Man Singh and others. Therefore Rajdas arranged for the team to be housed in the residence of Harshalal, another friend and member of Nepali Congress.

En route Harshalal’s house, Singh raised the concern of the weapons they were carrying along with Rajdas. Singh suggested it would be better if the weapons were smuggled by other people, therefore they would only have to worry about their own safety.

Rajdas assured Singh that he would arrange the safe passage of the team and the weapons to Kathmandu.

Ananta Pradhan, a resident of Banepa and a friend of Rajdas had married his daughter to Indra Man Joshi, a resident of Kathmandu. At the time, Joshi had come to Banepa to take his wife, who was visiting her parents, back to Kathmandu. Joshi was a driver by profession, and owned a Chevrolet (registration number 312).

Rajdas, Ananta, and Indra Man discussed with each other, and Indra Man not only decided to help smuggle the weapons, but also to help the revolutionaries. The next day he traveled to Kathmandu, and brought another friend with him – this time a Ford owner.

Therefore, two cars, a Chevrolet and a Ford were readied to smuggle Ganesh Man, his team, and the weapons into Kathmandu.