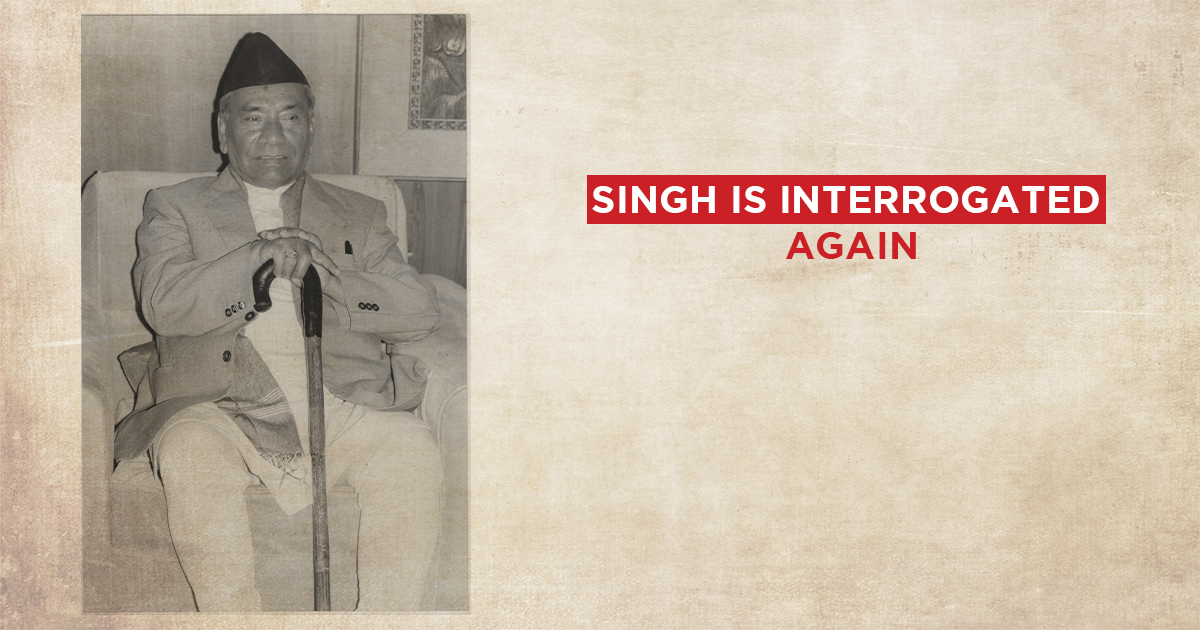 After three days of receiving a lashing, Singh was called in again for a second round of interrogation. Singh, whose body was still sore, and was barely able to walk properly, dreaded the thought of another interview. Another interrogation implied the possibility of another thrashing.

“I walked slowly, wondering if my body could endure another round of lashing”, Singh shared with Mathbar Singh his memory of the day.

“The interrogation room and the people interrogating me were the same, but unlike my previous experience, their attitudes were pleasantly different.  Their questions were polite, and addressed to me with respect”, Singh said.

Ganesh Man Singh was surprised at the sudden change of behavior, and only later found that the politeness, respect, and dignity had been ordered by Shree Teen Mohan Shumsher himself. According to Singh, Mohan Shumsher had been infuriated after hearing the torture Singh had been met with, and had admonished Hari Shumsher for his actions.

Singh could only speculate on why the Maharaja ordered to do so – one being the Maharaja’s interest to treat Singh with respect as he represented a larger political force that threatened to topple the Ranas.

Around the time Singh had been arrested, Nepali Congress, had announced to launch an armed revolution against the Rana government. Therefore, the Maharaja could have instructed the interrogators to extract as much information as possible, as made evident by the detailed nature of the interrogation.

“The interrogators made a lot of effort to extract details about the party, its members, and other activities. But I did not divulge much”, Singh shares.

When asked about his hideouts, Singh simply replied “ethically it would be wrong to disclose facts about my hideouts; therefore I will not speak about it”.

Remembering his interrogation, Singh also says that despite the autocratic nature of the Rana government, they would not force a statement from anyone.

King Tribhuvan escapes from his palace:

One night Singh had a strange dream – he dreamed he was roaming around the streets and by-lanes of Kathmandu when he happened to reach upon the courtyard of ShwetaKali Temple. There, he saw a silhouette of woman dressed in a red and white garb. Singh remembers the woman radiated a kind of ethereal brightness which suggested divinity.

“Who is she?” Singh asked a friend who was accompanying him.

“She is Shweta Kali, and manifests occasionally. You are very fortunate to have seen her”, the friend replied to Singh.

At the same time Singh was jolted awake.

Outside, he could hear a lot of activity. He woke up and looked outside to see a lot of guards moving around the compound.

Singh instantly feared the worst – rumours were rife that Singh was about to be sentenced to death. He believed the increased number of guards were in preparation of the same.

The activity continued throughout the morning – Singh sensed urgency within the guards. Vehicular and cavalry movement had intensified. They were either entering Singha Durbar, or hurriedly leaving.

Around 9 a.m., Singh heard the sound of bugles blaring from Dharahara. The blaring meant Mohan Shumsher was due to make a national announcement from the Khari Bot at Tundhikhel. Immediately all the guards, except the ones keeping watch over the inmates left for Tundikhel.

Around noon, the battalions returned, and finally at 1 p.m., Singh was able to talk to a known guard.

“What did the Maharaja announce?” Singh asked eagerly.

“Yesterday, Shri Pancha Maharajdhiraj Tribhuvan, along with his family members, under the pretext of going on a hunting expedition, escaped the palace, and took refuge in the Indian Embassy. Mohan Shumsher declared King Tribhuvan a traitor, and will crown Gyanendra, Tribhuvan’s second grandchild as the next king of Nepal. Gyanendra was away at a relative’s place, and could not accompany Tribhuvan”, the guard informed Singh.

“The king has made a bold move towards demanding democratic reforms in Nepal”, Singh thought from his cell.

Outside, Kathmandu was in frenzy.

Tribhuvan’s decision to leave the palace, and seek refuge at Indian Embassy had caught the Rana government off-guard.

Mohan Shumsher sent two of his trusted aides to the Indian Embassy with a request to deny Tribhuvan refuge, however that was denied. They then requested the Embassy to return crown prince Birendra, so as they could make him the monarch. That too was denied.

The Rana government also tried to get India, the United States, and the United Kingdom to officially recognize Gyanendra as Nepal’s new king – however, all three nations said they wouldn’t do so.

King Tribhuvan’s decision to escape from the palace had placed the Rana government in deep trouble – domestically and internationally. Nepali Congress, who had already announced its decision to launch an armed revolution were further emboldened by the King’s move.

Coincidentally, the day of King Gyanendra’s coronation ceremony was on the same day of Lakshmi Puja. Although many political workers called for valley residents to boycott the festival, Kathmandu people were not willing to do so. They continued their practice of illuminating bright lamps.

“The regular observance of Lakshmi Puja without any political disruptions led the Ranas to believe the public were satisfied with Gyanendra as their new king. However, the public weren’t happy”, Singh tells Mathbar Singh.