Following B P Koirala’s release from jail, Koirala returned to Patna. In Patna, doctors advised Koirala to avail treatment in Bombay. Ganesh Man Singh wished Koirala a speedy recovery and made his way to Nepal-India border in Raxaul.

In January, 1948 A.D., Padma Shumsher promulgated the Proclamation of the first constitutional law in Nepal. It included several measures for reform, including provisions for participation of people’s representatives, separate independent Court of Law from administration and unhindered grant of fundamental rights to the citizens of Nepal.

Although Rastriya Congress had their doubts, nevertheless they decided to accept the constitutional law as an achievement, and therefore evaluate its implementation.

At the time, Gopal Prasad Bhattarai and Ganesh Man Singh were entrusted with the task of organizing party activities in Bara, Parsa and Kathmandu – their base was Raxaul. At Raxaul, they used to talk to Nepalis, either heading to, or returning from India, and try to indoctrinate them about the values of democracy – many listened, many admired, and many turned away in fear of the Ranas, nevertheless the duo continued their efforts.

Singh also describes his situation in Raxaul as pitiable – their economic condition was so miserable, they had to spend many days in hunger. At the time, they used to sell Yugabani, the mouthpiece of Nepali Congress for sustainability – if they sold none, they used to drink water and sleep, if they used to sell some, they could eat Sattu. Their living conditions were difficult too – ten people would share one room, and their beds had no mattresses or pillows.

One day, Singh’s mother and grandmother, who had embarked upon a pilgrimage, passed through Raxaul. Singh accompanied them up to Motihari, and just when they were departing, Singh’s grandmother placed Rs. 100 in Singh’s hand.

“That night was like Dashain, we enjoyed a feast of rice, meat, and curries. It was a long time we had eaten such delicious food”, Singh would later tell Mathbar Singh. 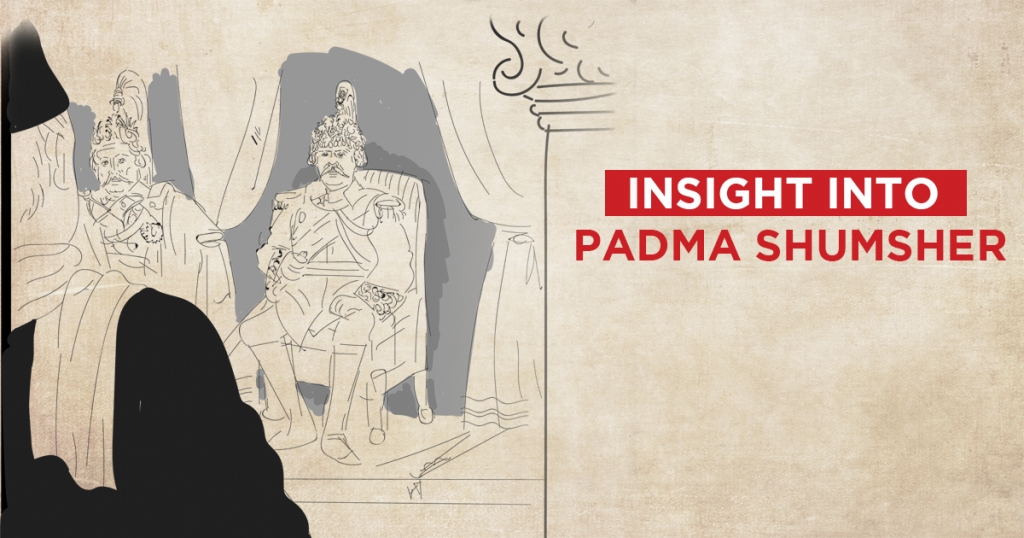 While Singh and his colleagues spent their days in Raxaul, one day, in April 1948 A.D., Padma Shumsher, in a violation of the constitutional law, declared Rastriya Congress to be an illegal party. Days later, Padma Shumsher moved to India, paving way for Mohan Shumsher to become Nepal’s Prime Minister. Mohan Shumsher, along with his brother Babar Shumsher, harboured anti-reformist views.

For Rastriya Congress, all hopes for reform via peaceful means in Nepal were quelled.

The incident leads Ganesh Man to re-visit an earlier episode with Padma Shumsher.

“Amongst the palace nobles, Padma Shumsher was nick-named the Weeping Maharaja”, Singh remarked about Padma Shumsher. “He was very emotional and soft-hearted. Had he stepped up to the sons of Bir Shumsher, he could have paved way for Nepal’s democratization.”

According to Singh, during the hearing of the 1940 A.D. (Praja Parishad Case), on the day of judgment, noblemen were assembled at British Hall (Belayati Baithak) of Singha Durbar. The noblemen included then PM Juddha Shumsher, King Tribhuvan, Padma Shumsher, Mohan Shumsher amongst other high-ranking officials. Kazis and Sardars, including Bada Kazi Ratna Man Singh (grandfather of Ganesh Man Singh) were in attendance.

“Padma Shumsher did speak up, until later”, Singh shares to Mathbar Singh.

Ratna Man Singh, who was already up on his feet, and in tears, was spared the agony of sentencing his grandchild to jail.

Tussle in Congress, and B P Koirala’s second arrest:

B P Koirala, after availing treatment arrived back in Patna. Many had assumed Dilliram Regmi, who was Acting Chairman would automatically relinquish control, and allow B P Koirala to become President. However, Regmi contested saying he had been elected Chairman through an election, and should be allowed to complete his term.

The split, accompanied by Mohan Shumsher’s ascension to power, caused huge distrust in the possibility of reform in Nepal. Rastriya Congress lost its respect within the people of Nepal, some even cursed the party.

In Kathmandu, youths had formed a new party called ‘Nepal Praja Panchayat’ to campaign for civil awareness and to contest in the municipal elections within the framework of the constitutional law.

As the trio started organizing meetings, the government got hold of the same. Police arrested B P Koirala along with Tri Ratna Bajracharya and Gauri Bhakta on charges of abetment. Kisunji and Vyathit were able to escape.

“Koirala’s arrest added vigour and enthusiasm within members of Nepali Congress”, Ganesh Man said. They decided to revive its People’s Movement. Koirala too had started a hunger-strike in jail demanding improvement in the living conditions of inmates, and compulsory human treatment of all inmates. His hunger strike caused a sensation in India, and Indian media published several stories about Nepal’s political situation.

For Mohan Shumsher, who was readying to forge new political relations with India, the negative media publicity meant bad news. Therefore, with a promise of reform, Mohan Shumsher ordered the release of B P Koirala.