Nhuchhay Ratna Tuladhar’s death was a tipping point for Kathmandu. In the days that followed, mass protests against the Ranas started becoming a regular sight. So much so, the government had to start announcing curfews to prevent such agitations.

Meanwhile, in Delhi, preparations for a tripartite agreement between the Rana government, King Tribhuvan and Nepali Congress was underway. However, Kathmandu residents were adamant that political prisoners be freed before any such agreement was signed.

One day, on the 13th day of Mangshir (28th November, 1950), citizens of Kathmandu, defying curfew orders gathered in large numbers demanding political prisoners be freed immediately. The group was marching from Bhugol Park towards Central Jail. Due to pace differences, the group was separated into two – one was ahead, while the second one behind.

Bhogendra Man Singh, a talented student with a deep knowledge of history, would probe Ganesh Man Singh about the objectives of Nepali Congress.

As the first group crossed the palace of Hari Shumsher, loud gunshots could be heard. Panic ensued, and everyone instinctively dispersed in different directions. Three people were shot, one of them being Bhogendra Man Singh. I could see the fallen Bhogendra Man and the two others being dragged by the police.

Immediately afterward, the Army sprung into action, and the curfew order was tightened. We had no idea where Bhogendra Man Singh was being held, or if he was alive or dead. We spent the night in great agony. 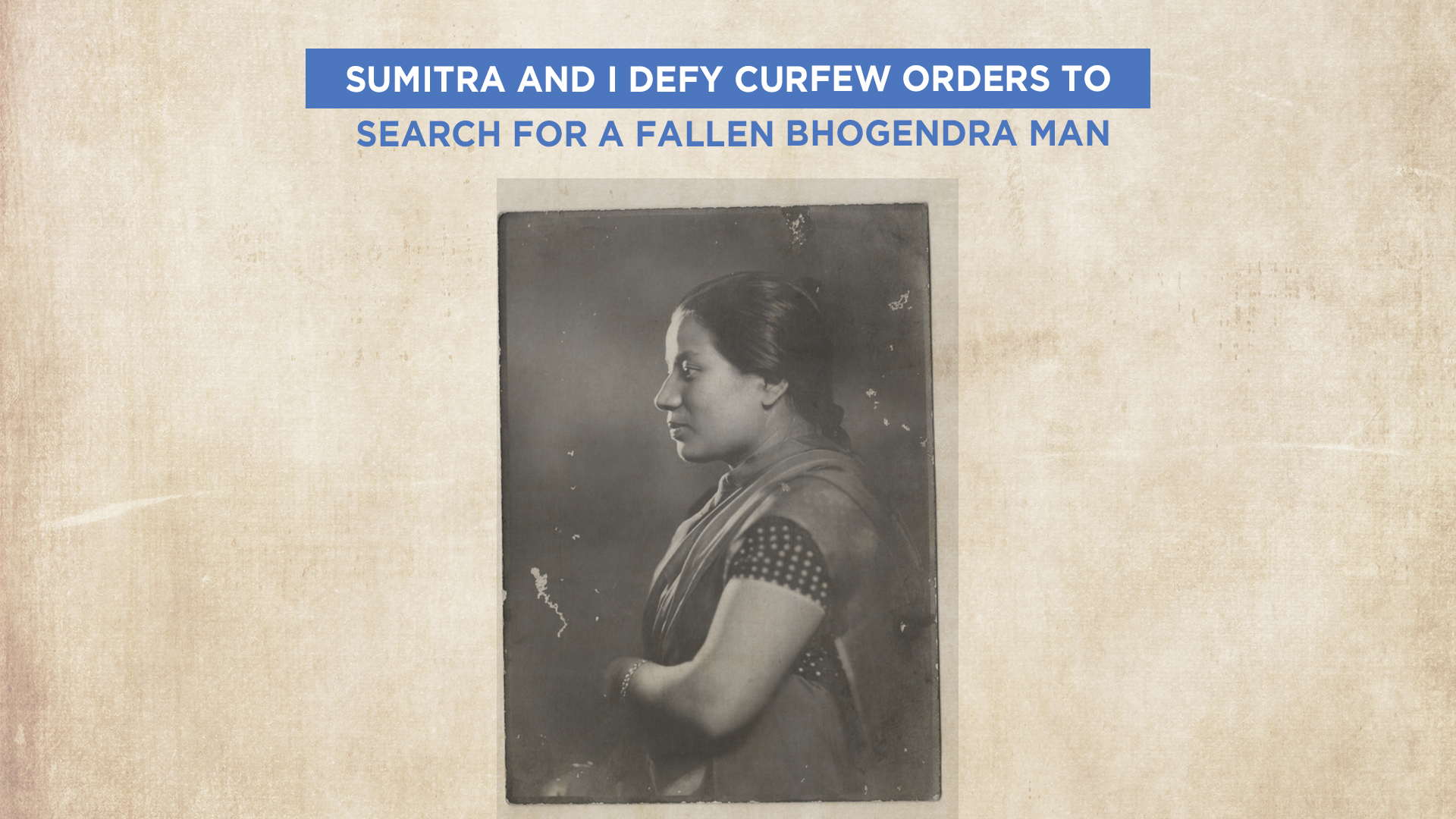 The next morning, I along with Sumitra Singh, defying curfew orders stepped out of our homes to learn about the whereabouts of Bhogendra Man Singh.

We first reached Bir Hospital. He wasn’t there. We then proceeded to the Military Hospital. The guards, who reminded us of the curfew orders, wouldn’t let us in. But we were insistent.

When we finally made our way inside, we found Bhogendra Man and his injured friends – Bhogendra Man was in a bad shape. He had lost a lot of blood. I raised a huge hue and cry, demanding we be allowed to take Bhogendra Man home. After much persistence, and threats of launching a Satyagraha right then and there, the authorities allowed us to Bhogendra Man to be taken home.

Sadly, Bhogendra Man succumbed to his injuries the next day. Sumitra too, deeply affected by the incident passed away ten days later.

After Bhogendra Man Singh’s death, Kathmandu became quiet. A wave of bitter cold engulfed the city, and the people of Kathmandu abided by the curfew orders.

We would hear the sound of a bugle from Dharahara every day. After the bugle, a guard would announce the curfew order of the next day. The notice would also allocate time for residents to carry out their daily activities – shop for necessities, fetch water, etc. Occasionally at night, a canon would be heard as a warning to Kathmandu residents to stay indoors.

The Ranas believed Kathmandu had submitted to their authority.

Meanwhile, outside Kathmandu, there was mayhem.  Internationally, other nations continued their refusal to acknowledge Gyanendra as the King of Nepal, and domestically, the Liberation Army (Mukti Sena) had stepped up their armed revolution. The Ranas had lost much of their territory to the revolutionaries.