Towards the end of the People’s Movement of 1990

A meeting with Ganesh Man Singh:

The next day, then Prime Minister Lokendra Bahadur Chand reached Bir Hospital again – to discuss with Ganesh Man Singh. PM Chand proposed a dialogue with the government. To which Singh replied:

To which PM Chand replied, “We understand. And if you are willing to talk, so is His Majesty”.

Singh then replied, “First we need some commitments. If the king is willing to make a public announcement that the people’s wishes have been fulfilled, and that the Panchayat system will end, then we will sit down for a dialogue”.

It had only been a few hours, when PM Chand returned again to Bir Hospital.

“The king is willing to address your demands”, he said.

Singh maintained a resolute attitude and replied: “The announcement has not come formally. However, if the king is willing to make amendments, we will send our leaders to meet with him, and discuss the future path”.

A message from the Royal Palace:

Around 9 PM on the same day, leaders of the revolution, Krishna Prasad Bhattarai, Girija Prasad Koirala, Sahana Pradhan, and Radha Krishna Mainali reached the Narayanhiti Palace to discuss with the king.

At exactly 11:05, the Royal Palace made the following press statement (translated):

“Keeping in mind the changing international political sphere, and the interests of all unified Nepalese, His Highness has agreed to change the word “partyless” from Nepal’s Constitution (2019 BS), and to incorporate, keeping in mind Nepal’s social and political welfare, a revised term of the same. His Highness, in the past has made political reforms keeping in mind the public welfare of its citizens, and will continue to do the same in the future as well”. 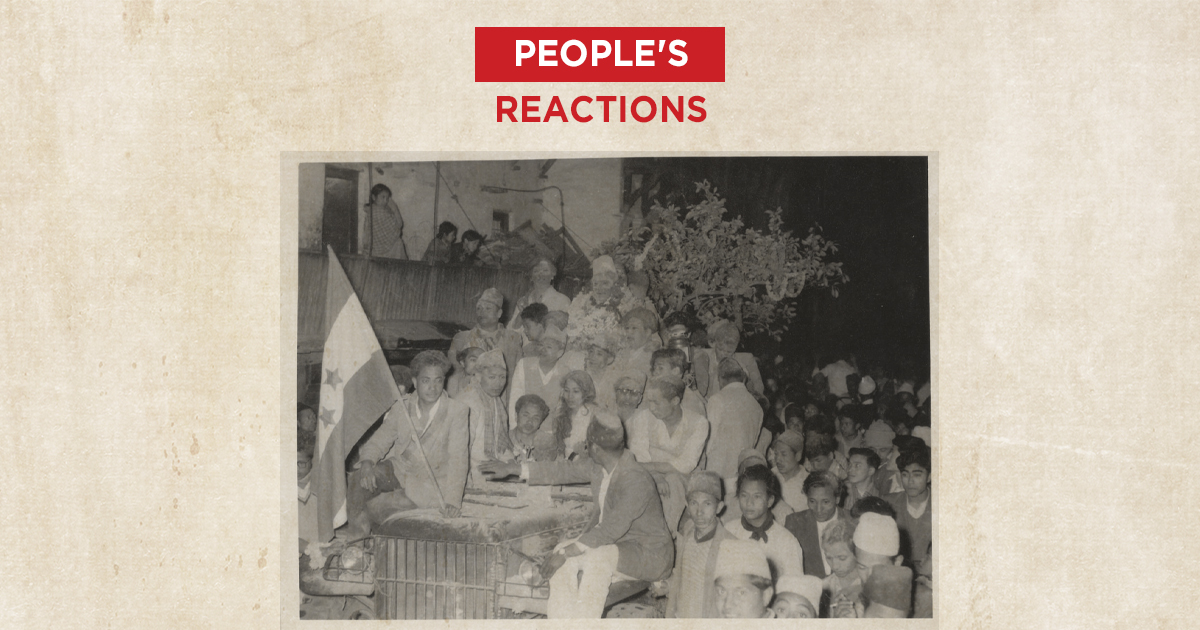 As soon as the announcement was made, journalists from Nepal Television broadcasted an interview of the four leaders from the hospital itself. The four leaders expressed great happiness on the king’s decision to remove the word “partyless” from the constitution.

“His Highness King Birendra is an extremely respected leader. His love for the people of Nepal has willed him to listen to their interests, and act accordingly. We welcome his decision”, Krishna Prasad Bhattarai said from the palace gate.

Sahana Pradhan too expressed great happiness at the outcome of the meeting. “In our first meeting with His Highness, he has paved a favourable environment towards a positive change in our country. I believe, we will now be able to gain equitable political and human rights”, she said.

And on this note, on the 50th day of the launch of the People’s Movement, victory was realized by the people. Thousands of people across the country celebrated their victory, from their balconies, and on the streets. Sadly, however, in a few places in Kathmandu, security officials enforcing the curfew hadn’t been informed about the change in decision, and a few people celebrating the change were shot at by the officials, fatally.

Therefore, shock and grief marked what was supposed to be a momentous celebration.