In an earlier chapter, Ganesh Man Singh discusses an ongoing dissent within members of Nepali Congress’s Liberation Army – their unwillingness to surrender arms. For Nepali Congress, addressing the issue was of utmost urgency – and the adoption of the interim Constitution of 2007 B.S. paved way for the same.

Because, maintaining law and order was the task of the Home Ministry, a ministry under B P Koirala, Congress leaders jointly sought its solution – and came up with one. They suggested integrating cadres of the Liberation Army with the Nepali Army.

“In this way, we would be able to fill the much needed human resources for the Nepali Army, and members of the Liberation Army would also get an opportunity for employment”, Singh shared the rationale behind the proposition with Mathbar Singh.

“Furthermore, most of the soldiers of the Liberation Army had prior military experience. Most of them had either fought for the British or the Indian Army during World War – II”, Singh added.

While that was the argument presented by Mohan Shumsher, Singh believed Mohan Shumsher did not reject the proposal for that purpose only.

“Nepali Army had always been loyal to the Ranas. Mohan Shumsher worried the loyalty would be eroded if the Liberation Army integrated with Nepali Army”, Singh shared his views with Mathbar Singh. 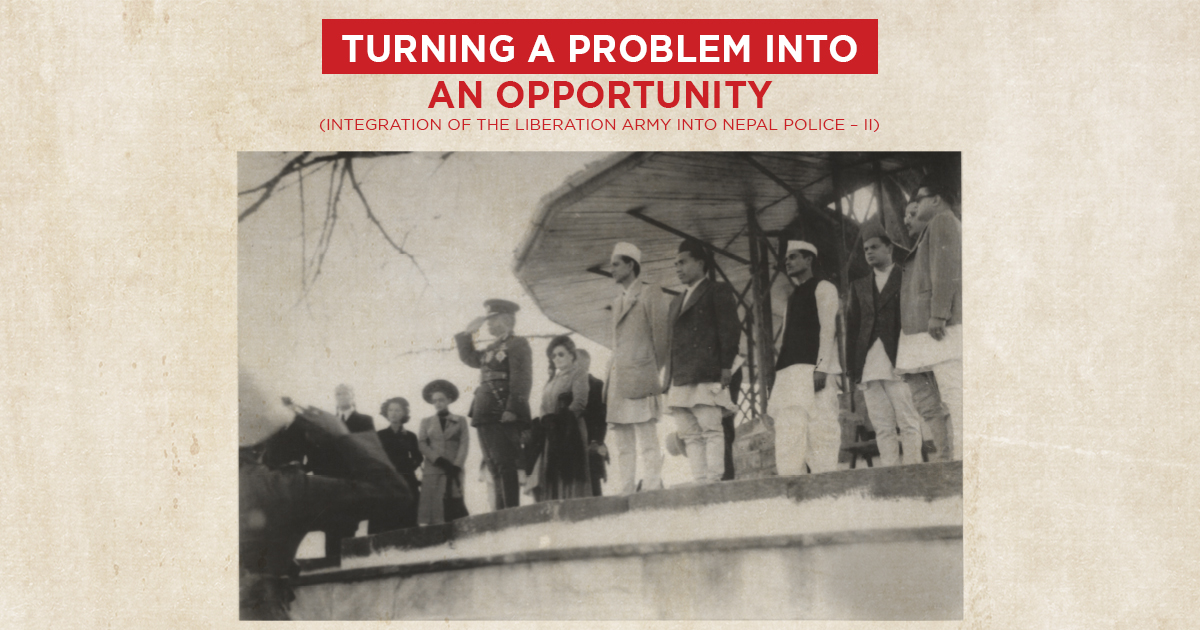 Nepali Congress had believed the integration of the Liberation Army would solve the problem; however Mohan Shumsher’s rejection caused an impasse. The Home Ministry, under immense pressure to solve the problem had to urgently think of another solution.

“As easy as it may be to teach lessons on politics to someone, it is equally difficult to bring that into practice. We were experiencing this firsthand”, Singh shares with Mathbar Singh.

“Earlier, we would loudly proclaim that we would solve Nepal’s problems once the Ranas were removed, and democracy ushered. However, it wasn’t so easy – we had to learn it the hard way”, he added.

While leaders in Kathmandu searched for a solution, members of the Liberation Army and other groups were continuing about with their activities.

Realising they were in shortage of police officers to enforce law and order, leaders therefore suggested the Liberation Army be integrated into Nepal Police.

Mohan Shumsher had no reservations against this decision, and accepted the proposal gracefully.

Therefore, the decision to integrate the Liberation Army into Nepal Police was passed.

After passing the decision, Nepal’s new government was able to solve two problems – unemployment within members of the Liberation Army, and a reinforced and well supplemented Nepal Police force.

But the problems did not end there.

“You see, members of the Liberation Army were chosen on the basis of zeal to attain democracy in Nepal. Their age and health assessment weren’t criteria. However, Nepal Police is an official organization with a certain set of criteria for selection. We could not bypass that and let every member of the Liberation Army join the forces”, Singh shared their then problem with Mathbar Singh.

“Furthermore, it was not only necessary to judge them via their age and health, but it was equally important to determine that the joining members would also be disciplined”, he added.

“The issue had to be handled sensitively – we did not want members feeling abandoned, however also had to put national interest above the party’s”, Singh shared.

The leaders of the Liberation Army – namely, Puran Singh, Gyan Bahadur Yakthumba, and Dilman Singh, were then asked to share their suggestions in writing. Puran Singh and Gyan Bahadur Yakthumba had also been entrusted with the task of consolidating scattered member of the Liberation Army in Nepal’s west and east respectively. They were able to successfully collect arms from the cadres and maintain peace and order in their regions until a resolution to the problem was found.

The trio proposed the same – that, officers must be chosen as per their ability and willingness to serve the Police Force.